Head in the sand. Illustration by Alex Anstey

The Minerals Council of Australia, a foreign-controlled mining lobby, has duped Australia’s major media in an $80bn PR scam by not accounting for billions in GST refunded every year, exaggerating the contribution of the minerals industry to Australia. Callum Foote reports.

Australia’s major media organisations, News Corp and Nine Entertainment, have been duped by the mining lobby’s false claims about its contribution to Australia. The industry peak body, Minerals Council of Australia, has failed to include in its analysis the more than $72 billion in GST refunds the industry has received between 2010 and 2018, and an estimated $80.6 billion over the past 10 years.

The Australian, the Australian Financial Review, and the Minister for Resources Keith Pitt have consistently repeated the misleading claims provided to them by the mining lobby via the firm the MCA hired to conduct its reports, Deloitte Access Economics.

Deloitte found that the minerals industry had contributed more than $238 billion in company tax and royalty payments since 2010, with $132 billion from company tax alone.

However, the report avoids mentioning that the mining industry, as an exporting industry, receives a huge GST refund every year.

When removing just the amount of GST refunds, the mining industry paid a total of just $48.4 billion. When including other taxes such as fringe benefits tax, excise tax, petroleum resources rent tax (PRRT), luxury car taxes, payroll tax and so on, the figure increases to $68.5 billion. This figure is what the ATO points to when discussing total industry tax.

The Minerals Council refused to defend its claims when approached, numerous times, for comment about its members receiving GST refunds. The editors-in-chief of the Australian Financial Review and The Australian, Michael Stutchbury and John Lehman, also failed to respond to questions despite their publications failing to check the MCA press releases year after year.

The data used for this investigation, as well as Deloitte’s analysis, comes from the ATO’s Taxation Statistics data series. Within this series is net company tax, which Deloitte use, GST refunded, which we have used here, and a total industry taxation figure, which we used for our previous investigation.

During our correspondence with Deloitte, we pointed to the total taxation figure, which nets off GST refunds and accounts for all other major taxes, as a more comprehensive figure they could use in their future analysis. In reply, Deloitte asked us why we even bothered to account for GST presumably not being aware of the $72 billion in refunds their analysis failed to account for.

Mark Ludlow’s feature in the Financial Review on May 20, IEA’s heroic assumptions to reach net zero by 2050, snuck in the fact that “Australia’s mineral industry paid $39.3 billion in royalties and taxes to federal, state and territory governments in 2019-20, according to a recent Deloitte report.”

It should be noted that the article contained no references to company tax, just the all encompassing word “taxes”, which is a mainstay of mainstream media reporting on the figure, yet misleading.

In the accounting profession, company taxes are regarded as deriving from company revenue. That is, income from a business comes in, costs such as wages are paid which leaves gross profit upon which company tax is paid. Taxes like GST and PAYG are *collected* for the government, not *paid* by the company.

Forensic accountant Jeff Knapp: “GST doesn’t come through the revenue of the company into profit, which would be ‘company tax’. It is collected from customers, just as PAYG is collected from employees”. These taxes are not paid by a company, they are collected, for government, on behalf of a company.

Fossil Fuel Fiesta: Australia’s coal and gas giants get more in subsidies than they pay in royalties

McIlroy even makes the mistake of mistaking royalties for taxes, ““the report found the sector paid a combined $39.3 billion in taxes” (italics added).

Staggering figures released by @MineralsCouncil show just how important resources are to Australia. $238.8 billion in taxes and royalties from 10/11 to 19/20. The industry has provided the backbone for our economy through #COVID19 #auspol

Minister for Resources Keith Pitt tweeted that resources have provided “$238.8 billion in taxes and royalties from 10/11 to 19/20”. Pitt was retweeted by the Minerals Council.

By only considering the company tax paid, Deloitte, the Minerals Council, the newspapers, and Keith Pitt have all been happy to exaggerate the mining and minerals industry’s benefit to Australian government taxation revenue. Ultimately, Deloitte claimed that they had not misled the Australian public because the question the firm had been asked, that is, to review company tax and royalties paid by the minerals industry – was “reasonable”.

Pradeep Philips claims that Deloitte was “asked a very specific question around the mineral sector and company taxes and royalties – a legitimate question in our view”.

Deloitte’s contention is that it is reasonable to examine only the two concepts, royalties and company tax, because they are significant expenses is easily challenged when considering other expenses of the mining and minerals industry.

Is it “reasonable” for an analysis of an industry’s expenditures to ignore all other significant expenses, such as labour costs, mine remediation, capital expenditures alongside any other kind of tax?

These are the sort of questions to which the mining sector’s supporters are failing to respond.

It should be noted that Deloitte’s report considers only the minerals industry, excluding oil and gas from its analysis. However this has no significant impact on Michael West Media’s analysis.

So why have royalties and company tax been singled out?

It appears the report was intended from its inception to provide an exaggerated view of the contribution of the minerals industry to Australian governments to ward off attempts to increase taxes.

First commissioned in 2014 under MCA’s then-CEO Brendan Pearson – who has been more recently employed in the Prime Minister’s office – Deloitte’s report was used as proof in an argument that supported the MRRT being repealed.

Pearson said the report “underlines that we are paying an effective tax rate above 40 per cent, when you combine the tax rate and the royalties”. 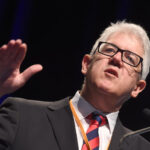 Royalties and taxes are two entirely separate concepts and to conflate the two is misleading. However, it is a well-worn strategy used by the mining industry to make it appear as though they are paying a higher tax rate than they really are.

Brendan Pearson was forced out as CEO of the Mineral Council in 2017, when BHP took issue with his pro-coal, anti-Paris Agreement lobbying. BHP threatened to review its membership with the MCA, with Rio Tinto signalling it would do likewise, if Pearson did not step down.

Pearson, landed on his feet taking up a senior advisory role regarding international trade and investment in Prime Minister Scott Morrison’s office in 2019.

BHP and Rio Tinto, who are the MCA’s largest members, declined to be interviewed for this story

This investigation follows on from research undertaken for the Neroli Storytelling Colvin Foundation who sponsored Michael West Media to produce the report  ‘A Fair Share: mining royalties and taxation in Australia’ .