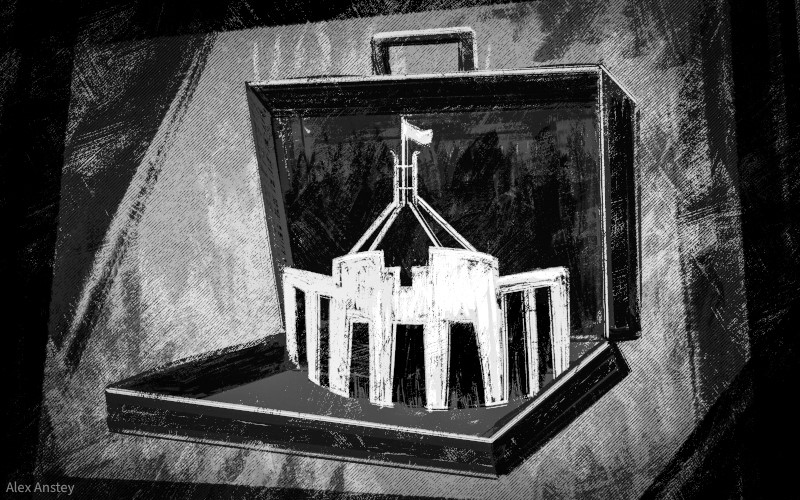 Out of the black box. Image: Alex Anstey

Under cover of climate debate, the Greens and Labor swiftly and smartly killed off a longstanding loophole which let Australian billionaires hide their financial affairs. Michael West reports on politicians beating the lobbyists.

It was swift in the end, and silent. The “Billionaires’ Loophole” was abolished in a rapid act of Parliament yesterday amid the dramatic passage of Anthony Albanese’s climate bill, relegating 25 years of regulatory apartheid to Australian history, a period of one rule for the rich and powerful and another rule for the rest.

We are talking about the “grandfathering” exemption, a loophole standing since 1995 which allowed Australia’s richest families of the time to hide their financial affairs.

The Stokes, Pratts, Rineharts, Triguboffs and Lowys, Solomon Lew, Bob Ell, Marc Besen, and reclusive dynasties you’ve never heard of; all will now be subject to the same laws as everybody else. Even billionaire parvenus such as Andrew Forrest and Mike Cannon-Brookes, and multinational corporations too, are required to disclose their financial statements with the regulators. Not so, those on the “Secret Rich List”.

And it was done in style, a classic case of parliamentary efficiency, the Greens and Labor working together to advance the public interest.

The Greens moved the bill, Labor backed it – the cross-bench too – leaving a ragtag Opposition to forlornly vote in favour of secrecy for Australia’s richest old families. It means disclosure and transparency, as well as democratic equality. It means that now we can see how much corporate tax they pay, see their tax haven entities, their related party transactions, their government grants, their revenues and their profits; assuming they comply that is.

Why was it not foreshadowed, why so quick, why no debate? Was it part of the Greens’ deal to concede to Labor’s 43% climate target? As yet, it is guesswork but the deftness passage of the Treasury Bill Amendment through Parliament may have been designed to stave off calls from the billionaires, their family offices and lobbyists threatening to starve Labor of donations.

And the amendment, passed in the Senate with the House said to be a fait accompli, may be largely symbolic. ‘Family offices’ have plenty of time to restructure their affairs before next June 30, they have a hundred other ways to hide things, but it does mark the end of an unfair and undemocratic law which should never have been left to fester so long.

For years, assorted MPs had tried in vain to eliminate the grandfathering exemption. For years, it had been pipped at the post, most recently when former senator Rex Patrick had the numbers in the Senate but lost Pauline Hanson’s vote at the eleventh hour.

Famously, former treasurer Josh Frydenberg had claimed that if grandfathering were abolished, the billionaires and their families could be kidnapped, as if kidnappers did not already know Gina, Frank and Kerry were rich and preferred to pay $45 to obtain their Form 388 filings lodged with the Australian Securities and Investments Commission before they proceeded with an abduction.

Patrick deserves particular commendation for his valiant campaign on grandfathering, telling Michael West Media in 2020 that after 25 years “the Government still cannot offer a policy reason for the exemption remaining in the statute books”.

This was a cosy little arrangement that Australia’s “old money” billionaires enjoyed alone, courtesy of a federal government carve out in 1995, a cosy arrangement afforded no other Australians. Some of the country’s wealthiest individuals and family empires had fought tooth and nail to protect their privilege despite repeated attempts by parliament, the corporate regulator and Treasury to end it.

A total of 1,119 large proprietary companies are on this “Secret Rich List”; a result of “grandfathering” provisions of the corporations laws that were introduced by the government of Paul Keating 25 years ago. You can find many of them here.

The reform can also attributed to the work of young journalists at MWM Stephanie Tran and Luke Stacey – and lawyers and accountants in our contact base. On Boxing Day 2020, we began an investigation into the grandfathered companies. It entailed literally a thousand company searches and hours of analysis of ASIC and other documents. Many were political donors.

The investigation found at least 37 directors on the grandfathered list who also appeared on the Australian Financial Review’s  ‘Rich List’ of the top 200 wealthiest Australians for 2020.

The grandfathering exemption was put in place to give these wealthy proprietary companies time to adapt to a new financial reporting law introduced in 1995.

Introduced as a temporary plan by the Keating government, the list of exempt companies was to be reviewed after a few years but the Howard government stopped that move. The Rudd-Gillard government passed laws to limit the exemption, but the Coalition overturned them.

In August 1995, the Parliamentary Joint Committee on Corporations and Securities (PJSC) issued a report on the amendments to the 1995 Bill, which included the grandfathering exemption.

While the Committee supported the small/large company test to replace the reporting entity test, it had reservations about the grandfathering clause, concluding that: “Although the provision will ease the transition for some companies from the existing legislation to the new structure, [extending this assistance indefinitely] is not justified on any policy grounds.”

The parliamentary committee recommended, “the Bill be amended to include a sunset period of three years from the date of commencement of the legislation”.

In the wake of Rex Patrick’s 2020 amendment, which got up in the Senate on two separate occasions but was foiled by the Coalition in the House, Michael West Media began investigating the 1,119 “Dark Companies” on the grandfathered list.

More than 5,000 searches unveiled a string of reporting irregularities by the billionaires; further, there exists a strong connection between their Dark Companies and donations to the two major political parties, which raises the question: have Australia’s wealthiest families effectively bought off the political process?

This time there was no inquiry, no parliamentary debate, no time for billionaires to complain. It was swift, efficient and all in all a very good day’s work in politics. In kidnappers’ parlance this was the abduction of a bad law which was executed very well.