When executives from BP Australia fronted the inquiry into corporate tax avoidance last year, they omitted to inform the senators presiding that their parent company had sucked out a $3.2 billion “dividend” to a tax haven. Tax-clean.

The senators – Sam Dastyari, Nick Xenophon, Richard Di Natale and Matt Canavan among them – were not even made aware that BP Australia had a parent company in a tax haven. Nor had the government been made aware, as the law requires, through any disclosure to the Australian Securities & Investments Commission (ASIC).

The official ASIC records show the parent company in question, the enigmatically-named 200 PS Overseas Holding Inc, is domiciled in Illinois.

In fact, it is not domiciled in Illinois. Rather, its address is the tax haven of Delaware, the same address where another 285,000 entities are registered. Delaware is home to many of the world’s premiere tax dodgers, including the top two targets of the Australian Tax Office (ATO): Chevron and Rupert Murdoch’s News Corp.

“Too big to care, too big to be policed, too big to worry about regulators and too big for pesky politicians and their inquiries.”

Six months before the tax inquiry kicked off in November, BP had made its submission, along with rival oil majors Shell and Chevron. In this submission it also failed to mention its secret parent, its secret tax haven connection and its $3 billion rip on Australian taxpayers. Not a word, nary a skerrick of disclosure.

In fairness to BP, which denied its behaviour had been misleading in a written statement to michaelwest.com.au during the week, it should be said that, when it comes to corporate citizenship, the UK oil major is ahead of its rivals Shell and Chevron.

Although it only forked out $18 million in income tax in Australia last year, revenues had fallen sharply with the oil price. Usually it pays more than $200 million on sales of more than $20 billion – still a fraction of what it should pay.

Still, it does pay more tax in Australia than its peers and is not as aggressive in tax structuring. Shell managed to rack up revenues of $60 billion in Australia in three years and not pay one red cent in tax.

Did BP deliberately mislead the government? Or is this some sort of coincidence, an unlikely series of mistakes? Under the Parliamentary Privileges Act the penalty for contempt of Parliament is “imprisonment or substantial fines for individuals and corporations”.

In the least, the company owes Parliament an apology and ought to be correcting its statutory statements. Although, the chance of even the slightest reprimand for BP is remote, as is the likelihood it will correct the record.

This is a multinational. And misleading, furtive behaviour is typical of multinationals – and their Big Four advisers for that matter, EY (BP’s auditor), PwC, KPMG and Deloitte – too big to care, too big to be policed, too big to worry about regulators, and too big for pesky politicians and their inquiries. They just brush it off.

Here is a corporate behemoth which pays an insultingly low amount of income tax – though better than Chevron and Shell – despite the $20 billion in sales it soaks up from its Australian operations each year from its 1400 petrol stations “downstream” to its oil and gas exploration assets “upstream”. It had even shipped an oil rig out from Korea to drill the Great Australian Bight until the environment regulator thwarted its plans and it walked away last month.

That BP had presided over the largest marine oil spill in history in the Gulf of Mexico – the film about it, Deepwater Horizon, starring Kurt Russell and Mark Walhberg, is now showing at the cinema – did not help with its “social licence” to drill the deeps of the Bight.

Mind you, Chevron is still there with its plans afoot to drill the Bight. It would be a travesty if it were to get approval, given the operational debacle at its Gorgon project on Borrow Island, its bellicose tax structure and its shameless fight to intimate the Tax Office in court by appealing rather than settling the $10 million case it lost last year.

Chevron: A hornswoggler of the highest order

In any case, how could BP claim a social licence? The Senate has been misled, though BP denies it, and only way its secret parent was discovered was via David Barnden, a lawyer with Environmental Justice Australia, who couldn’t see it in the Illinois register and found it in Delaware on a hunch.

Dividend-streaming to a tax haven is not even legal, unless you are a multinational and can afford the lawyers and accountants to concoct a convoluted enough structure.

And while they are dividend-streaming to Delaware they have $10 billion plus in debt held by their UK parent. So the visible parent holds the debt and rakes hundreds of millions in interest payments out of Australia tax-free while the invisible parent rips out the billion dollar dividends.

In effect, Australian taxpayers have been subsidising BP – as they do most multinationals and their Big Four tax architects – while BP has been busy financing its $US20 billion Deepwater Horizon litigation in the wake of the 2010 Gulf of Mexico oil spill.

So the structure is this:

There is no sign of cash tax disclosures (CF statement) in the accounts of the operating group, BPG. It is BPH which manages and reports income tax for BPG and BPI.

It is no wonder the multinational tax fraternity and its Big Four tax scammers claim “you wouldn’t understand, tax is complicated”. It is complicated because they have deliberately make it complicated. 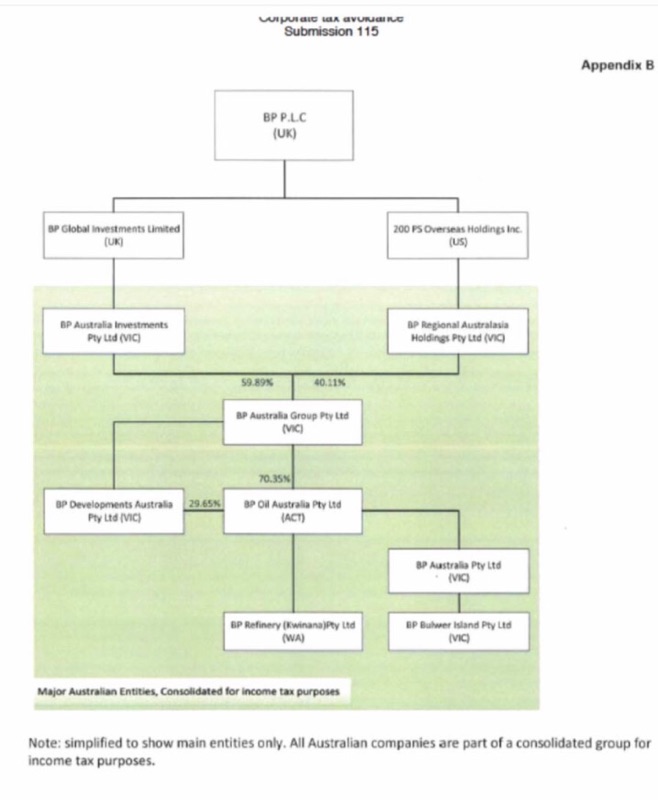 BP’s obfuscating structure in Australia ensures, via a pref share arrangement, that the big dividends can be sucked out to Delaware.

And the inter-company debt structure ensures BP Australia borrows a suspiciously large and unnecessary amount from its related entities in the UK at an annual rate three times that stated in BP’s Australian company accounts (3.7 per cent versus 1.21 per cent).

BP’s Australian investment arm had borrowed $10.5 billion from its UK relations at the end of last year while the borrowings of its consolidated operational subsidiaries were just $3.9 billion.

“We hold ourselves to the highest ethical standards and behave in ways that earn the trust of others,” declares BP’s mission statement. If that claim is to be even faintly believed, BP needs to come out and apologise for misleading Australia’s parliament.