Rupert’s results: no end in sight to the destruction of mainstream press 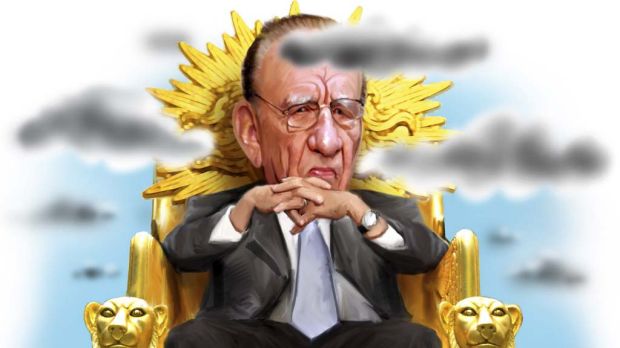 It is a sad thing for Australian media consumers, indeed for the public interest, that political agendas, ideology and management ineptitude, have left this country with no quality press.

Either of the major media houses – News with its 70 per cent share of newspapers and Fairfax with 25 per cent – might have seized the centre and wrought damage on the market share of their rival.

Instead, News marched further, stridently, to the right rather than dabbling in a semblance of balance, while Fairfax immersed itself in the crowded market of the left, up against a slew of lower-cost operators.

As in print, same deal online, where Fairfax with its click-bait strategy is routinely beaten up by younger, nimbler players while its remaining good journalists are compromised and unforgivably buried, watching on helplessly as their bosses contaminate their once venerable mastheads with listicles ad follow-ups of what was on TV the night before.

They lost their journalistic authority years ago, around the time their newspapers became dumber than their readers.

And so they pay good journalists to leave, racking up tens of millions in redundancy bills, while sapless editorial managers (with their KPI bonuses to sack their own staff) keep on their overpaid mates and cravenly kow-tow to vested interests.

History will not treat them well.

The latest profit results from Rupert Murdoch’s News Corporation are not a pretty sight. In fact there seems no end in sight to the destruction of the mainstream press.

Plunging ad revenues in the second quarter, falling newspaper circulations and a still feeble contribution from digital advertising mirrors the performance of News Corp’s arch-enemy Fairfax Media. The inexorable incursion of the internet continues to wreck the mainstream media; more journalists will go, newspapers will close, and coverage of important issues will be even further compromised.

More on the minutiae of Rupert’s results in a moment. Firstly,
there is a broader issue for the public interest. Australia’s tax base is being critically eroded. Not that Rupert paid his fair share anyway. Until oil major Chevron told the Tax Office to nick off and brought on a nasty court stoush, News Corp was the Australian Taxation Office’s public enemy number one.

Nonetheless, it did pay a bit. Internet companies fork out virtually nothing in income tax (and so will hardly gain from the government’s $50 billion corporate tax cuts package) and now neither does the mainstream media. The contribution of Google Australia to the national coffers is well telegraphed. Meanwhile, Netflix is bearing down on six million customers in Australia. How much tax does Netflix pay, anybody?

The commercial TV networks are suffering similarly and revenues for News Corp’s 50 per cent-owned Foxtel have plateaued. This too, thanks to the internet, appears a business in decline.

Incidentally, we exposed News two years ago for a sneaky $902 million loan to Foxtel, fixed for 15 years at a ludicrous interest rate of 12 per cent.

Why would Foxtel need a loan from News when it spits out cash like there is no tomorrow? It’s a tax lurk, that’s why.

Even more deviously, after claiming deductions on this overpriced loan, Foxtel effectively lends the money back to News at an interest rate of zero.

Anyway, after demanding an apology for this story and being told “no”, it seems News may have listened, or perhaps it was the Tax Office which listened.

The notes to the News accounts show the interest rate on this loan was reduced from the lofty 12 per cent – or six times the cash rate – to 10.5 per cent.

This is still way too high. If you look at the rest of Foxtel’s debt arrangements, signed off by its compromised auditor EY – there are a bunch of loans priced in the 3 per cent range, and a couple at 4 per cent-plus.

And then there is “that loan”, the from Foxtel partners News and Telstra, a veritable gift from the lenders to themselves – sticking out like the proverbial reproductive organs of the Familia Canis at 10.5 per cent.

For those unfamiliar with the point of oversized and overpriced loans, it is the way one gets money out of the country to a tax haven before one is required pay tax on it.

Interest alone paid annually to the Foxtel partners on this highly unnecessary loan is $94 million annually.

So it is that Australia’s pay-TV monopoly, which owes its existence to Commonwealth legislation, last booked a tax expense of just $23 million on income of $267 million (there was another $3.3 billion in external borrowings – all at a fraction of the News Corp/Telstra interest rate).

But we digress. Thanks to the havoc which has befallen the newspaper business, it may well be that Rupert Murdoch finally has a bona fide reason not to pay tax in Australia. Profits are under such structural pressure.

This $14 billion media empire, like its smaller and shrinking rival Fairfax, is in strife.

According to its second quarter earnings release, News axed more than $700 million from the value of newspaper mastheads and its investment in Foxtel.

Overall, revenues were down six per cent to $2.5 billion on the previous quarter. They were propped up by a very good performance by books and, in particular, Realestate.com.au (up 17 per cent).

Cable earnings were off slightly but the news division showed earnings before interest tax depreciation and amortisation (EBITDA) were smashed 22 per cent from $US241 million to $US188 million.

What this means is further job cuts to come. As News is a massive business with a sugar daddy in Rupert Murdoch, its operations in Australia have been largely shielded from the devastating cost cuts which have engulfed other media. They will come though.

Against the negligible cost base of online news outlets, there is simply no business model for a handful of copies of The Australian (News Ltd), or the Financial Review (Fairfax) for that matter, to be distributed daily, for instance, to Cobar in outback NSW on the back of a truck. Both these deeply bleed red ink every year.

Meanwhile Fairfax metro dailies The Age and Sydney Morning Herald are loss-making too, although word of their demise in daily print format has proved premature.

Fairfax management has found it logistically difficult to disentangle its print offerings so as to close some and keep other editions operating. Crudely, the problem is that if you are printing and trucking newspapers about you might as well keep the trucks full as there is still revenue – albeit it losses too – to be had.

The rub for Fairfax is that when it finally closes its loss-making editions it will have to shrink its cost base again (to make up for the lost revenue). More journalists to go – though no doubt its executives and directors will continue to overpay themselves until the very death.

It is a sad thing for Australian media consumers, indeed for the public interest, that political agendas, ideology and management ineptitude, have left this country with no quality mainstream press.

Either of the major media houses – News with its 70 per cent share of newspapers and Fairfax with 25 per cent – could have seized the centre – just engaged in good old-fashioned journalism – and clawed market share from the other, as well as attracting premium advertisers

Instead, it’s costs out till the end. Instead, News proceeded further, stridently, to the right in recent years rather than dabbling in a semblance of balance, while Fairfax buried itself in the crowded market of the left, up against a slew of lower-cost operators.

Same deal online, where Fairfax with its click-bait strategy is routinely beaten up by newer, nimbler competitors online while its remaining good journalists are compromised and unforgivably buried, watching on helplessly as their bosses contaminate those once venerable mastheads with prurient celebrity yarns and follow-up stories of what was on TV the night before. They lost their journalistic authority years ago, around the time their newspapers became dumber than their readers.

And so they pay good journalists to walk out the door, racking up tens of millions in redundancy bills, while weak-minded editorial managers (with their bonuses – KPIs) are incentivised to sack their own staff while they retain their overpaid mates and cravenly kow-tow to vested interests.

History will not treat them well.

Even now, the “culture wars” which have poisoned balanced reporting and commentary in our mainstream press are further infecting the national broadcaster.

What of this latest ABC jihad to sign up right-wing talent to counter left-wing bias? What of journalists with “no wing”, where do they go?