The push is on around Australia to re-open club pokies dens. At RSL Victoria, the old guard board has been caught out conducting a fire sale of veteran aged care accommodation to finance pokies licences. Stephen Mayne reports on the battle for control.

When faced with possible defeat at an impending election, what do undemocratic dictators do? Delay the election, of course.

And that is precisely what the pokies-captured old guard running RSL Victoria is contemplating doing rather than facing up to a revolt driven by united veterans, both young and old, at the upcoming AGM in July.

This website has chronicled the shenanigans inside RSL Victoria, starting with revelations last November about a $500,000 round robin transaction between two pokies sub-branches designed to use what was arguably veteran welfare funds to pay off a pokies debt to gambling giant Tabcorp.

This report sparked a probe by the Australian Charities and Not-for-profits Commission (ACNC), plus raised plenty of eyebrows inside the Victorian Government and Tabcorp. The ACNC ultimately signed off on it, which saw the gambling-focused executives at head office come up with another fancy scheme.

Earlier this month, we revealed (see article below) that a much bigger $3 million round robin deal was being proposed which had the same purpose — using charity funds to pay off pokies-related commercial debts.

Keep the Pokies Shut: Australians are saving $38 million a day

Amazingly, after reading our follow-up article on April 13 about the $3 million looping back and forth between the Beaumaris and Box Hill sub-branches, the RSL board intervened and rejected the proposal put up by the head office staff.

Check out how that backflip was explained in this letter the very next day to the RSL Victoria sub-branch Presidents, the key extract being as follows:

Believe me, that deal would have gone ahead but for the brave whistleblowers who assisted with the putting together of this April 13 article at Michael West Media.

However, a much bigger scandal has since exploded in the face of long-serving RSL Victoria President Rob Webster — that being his directive for the organisation to sell off its aged care accommodation business which puts a roof over the head of more than 500 Victorian veterans.

RSL Vasey Care is a 50-50 joint venture with the War Widows Guild and its board went rogue two weeks ago, emailing all 250 Victorian RSL sub-branches with a plea to overhaul the RSL Victoria board and save Vasey from the auctioneer’s hammer. It was all reproduced in this email by the RSL Victoria Reform Team including this Fact Sheet produced by the board of RSL Vasey Care outlining the situation.

And here below is the panicked letter President Webster sent out on April 16 to the 250 sub-branch Presidents after the Vasey board went nuclear trying to blast him off the RSL Victoria board after 30 years of occupancy. 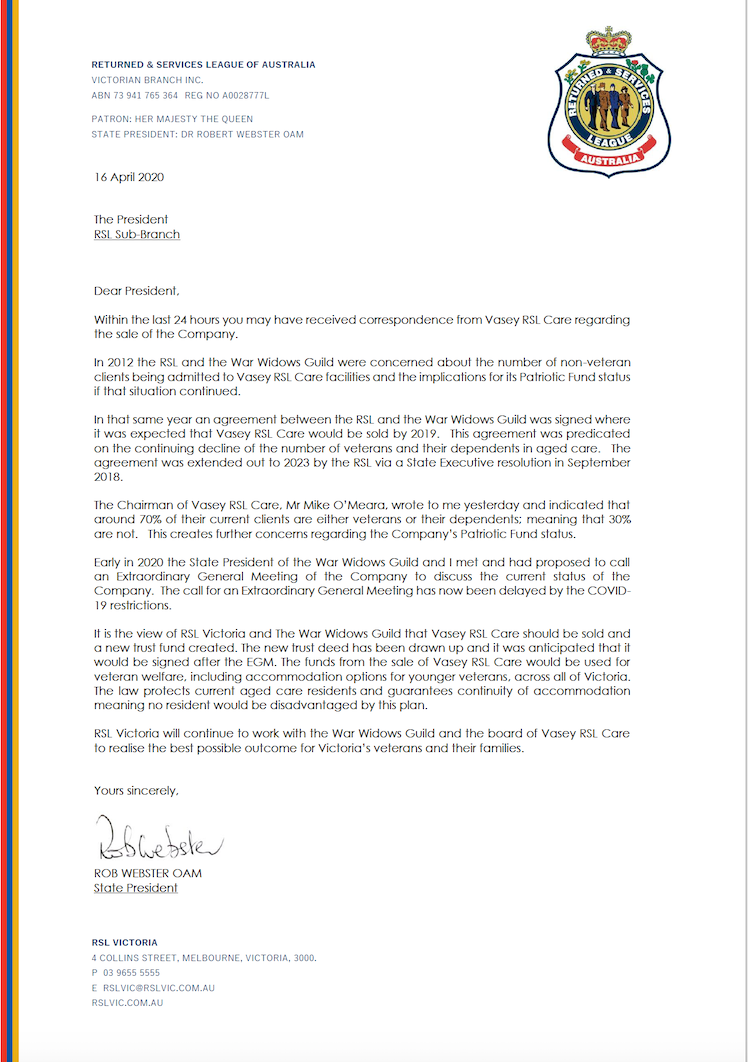 The RSL State President is quickly learning there are no votes in a secret fire sale of veteran aged care accommodation at a time of record levels of veteran homelessness and suicide.

So, with a full blown revolt underway to save Vasey Care and tackle RSL Victoria’s unhealthy pokies addition and general poor governance, challenging candidates have emerged for 8 of the 10 RSL Victoria director positions at the upcoming AGM.

The only two directors not up for re-election this year are the two Vice Presidents (Lee Webb and Des Callaghan) who were re-elected unopposed for two year terms last year.

The RSL Victoria board is due to meet at 10am tomorrow inside the heritage listed ANZAC House, which sits at the Paris end of Collins Street, just 100 metres from both the Victorian Parliament and the Premier’s office at No 1 Treasury Place.

The Victorian Government is fed up with the petty crony-infested conduct of the Victorian RSL and is looking forward to regime change from within rather than having to legislate changes to modernise governance as occurred in both NSW and Queensland.

However, the old guard are expected to argue for a three month delay in the election at tomorrow’s board meeting even though that would be unconstitutional, illegal and against the RSL’s own rules, something veterans are normally sticklers about following given their heritage in fighting for democracy, freedom and the rule of law.

Such a delay would be highly controversial with challenges already on foot. It is understood that a number of directors can see the legal and financial arguments to continue with the elections, as called, and will oppose any vote to delay the AGM without regulator endorsement.

One of the youngest incumbent directors, Glen Ferrarotto, has emerged as an internal challenger for the Presidency and appears keen to work with the younger veterans to modernise RSL Victoria’s governance, leadership and direction. Another to watch is the only female director on the board, Colonel Michelle Campbell, a gifted former KPMG staffer who only joined the RSL Victoria board last September, has an MBA and is now a senior Victorian public servant.

Modernisation and RSL leadership is being driven out of the rapidly growing Hawthorn RSL Sub Branch which was a dormant branch until President Lucas Moon organised its coming to life after he and other modern veterans were ousted by the old guard from the pokies-free Tramways Branch in Fitzroy.

I attended the Tramways EGM at the Fitzroy Town Hall last year and was appalled by the branch stacking and abuse by the cronies with the meeting chaired by RSL State Executives. And the governance on show at last year’s RSL Victoria AGM at Moonee Valley Race club was nearly as bad.

With more than $1 billion in assets, a magnificent property portfolio and a badly managed unprofitable pokies empire which is bleeding significant cash during the COVID-19 shut down, the time is now right for change at RSL Victoria.

At least 20 of the 50 RSL Victoria pokies dens will probably not have the cash liquidity to trade again and arguably should never open their doors again. The out-sourced manager of the pokies fleet, Tabcorp, should instead simply be told to take their machines away. The current contract allows them to over-charge a registered charity $28 a day, per machine, no matter how badly they perform relative to the professionals such as Crown Melbourne, Woolworths and the racing industry which are the three other large pokies operators in Victoria.

Keep the pokies shut for at least another 3 months

And speaking of the gambling industry, how cynical is Clubs NSW with their campaign to re-open as early as possible.

Channel Nine Sydney took the bait, offering up a puff piece on Monday night spruiking how much clubs give back to the community:

There are fears almost half of our clubs may not survive the enforced closures, so they’ve enlisted the help of an infectious diseases expert to find new ways of operating. @LauraTunstall9 #9News pic.twitter.com/LlFJHHmteF

NSW pokies clubs grossly overstate their so-called community benefit and instead deluge cash on overpaid CEOs and gold-plated facilities whilst benefitting from the lowest pokies tax rates in the nation.

They are also notorious for deluging free grog on gamblers …

Licked and loaded: how much are clubs pushing free grog on pokies players?

Love a flutter? Here’s a flutter!

As I explained during this 14 minute interview with John Stanley on 2GB earlier this month, Australia’s 5000 pokies dens should be one of the last things to re-open, perhaps about the same time as we allow direct flights to Wuhan.

If the NSW clubs are so keen to get back in action, tell them to give it a try first without opening up their gaming rooms as tens of thousands of Australian gamblers are benefitting from this enforced break from their addiction. With daily savings of $38 million courtesy of the shutdown – based on the annual pokies losses of around $14 billion a year – we’re headed for a historic multi-billion cut in pokies losses over the balance of 2020.

Long may the lockdown continue, at least so far as Australia’s nearly 200,000 addictive poker machines are concerned.

Stephen Mayne is a Walkley Award journalist, shareholder activist, former City of Melbourne councillor, former spindoctor for Jeff Kennett’s Victorian Liberal Government, founder of crikey.com and publisher of wwww.maynereport.com. He can be reached on [email protected]