Following the latest report from Transparency International warning of rent-seekers and corruption risks in the Australian mining industry, John Menadue argues the case for a Royal Commission on regulatory capture, major changes in political donations, tough and transparent regulation of lobbyists and a standing anti-corruption commission.

Back in April 2015, Gigi Foster and Paul Frijters wrote in Pearls and Irritations:

“The vast majority of the richest Australians work in property, mining and banking/finance. … Tellingly, the highest earning workers in these industries do not invent or use advanced production or distribution technology… People in these highly regulated industries are handsomely rewarded when they can negotiate special favours, such as property rezonings, planning law exemptions, mining concessions, labour law exemptions or money creation powers.”

Companies and senior executives in these three fields obtain enormous benefits by securing favours from governments.

We thought capitalism was about keeping governments out of business and letting the market decide! These rent-seekers believe in small government for other people but believe in big government when it comes to serving their own interests. Rupert Murdoch’s commercial “success” has depended overwhelmingly on winning favours from governments in Australia, USA and UK.

So often the public political “debate” is in terms of the public sector versus the private sector and markets. But in our mixed economy, a more immediate and serious issue is the way that powerful commercial interests can influence and capture governments for their benefit.  Just think of Adani at the moment or the way state governments have given concessions to energy companies to make a “success” of privatisation. The result has been an abuse of market power and high electricity prices arising mainly from vertically integrated private  generators and retailers.

There is a wide range of powerful industries where we see this regulatory capture — mining concessions, tax concessions, land rezoning, alcohol permits, gambling permits, restrictions on pharmacy outlets, restrictions on imports of second hand cars and of course the enormous government benefits bestowed on the power utilities . The list of regulatory capture is almost endless. Australia is infested with lobbyists working for these rent-seekers who are well rewarded by securing government  favours for themselves and their principals.

Take the case of our mining sector.

Transparency International (TI) has just released a report on corruption risks in the mining approval processes in Queensland and Western Australia.

TI referred to the government systems in those states as having high levels of transparency and accountability. Perhaps that might be gilding the lily somewhat. However, it went on to highlight some key vulnerabilities to corruption  in the respective approval processes.

The Department of Natural Resources and Mines (DNRM) investigates an applicant’s past resource authority in Queensland but does not assess performance in other Australian states or outside of Australia. Applicants are required to declare convictions for environmental offences and the cancellation or suspension of environmental authorities, licences or permits in Australia; however, legislation does not require self-reporting of environmental offences outside Australia. TI argues that this creates a high risk of leases being granted to operators with a history of non-compliance, citing the example of Adani Mining, which received approval for its Carmichael Coal Mine despite a history of environmental contraventions in India.

Similarly, TI suggests that the Department of Mining & Petroleum (DMP) in Western Australia does not conduct adequate due diligence into the character and integrity of mining companies and their principals.  While mining in Western Australia was previously dominated by Australian, American and Japanese firms, this landscape has changed with the entry of companies based in countries with low scores on TI’s Corruption Perception Index.  The lack of due diligence by the DMP may create opportunities for companies with poor corruption and compliance records to enter the Australian market.

TI also argues that there is a lack of investigation into the beneficial ownership of applicants, which means that the ultimate ownership of companies operating mines in Australia is unknown, opening the possibility for corrupt players to be mining resources in Australia. 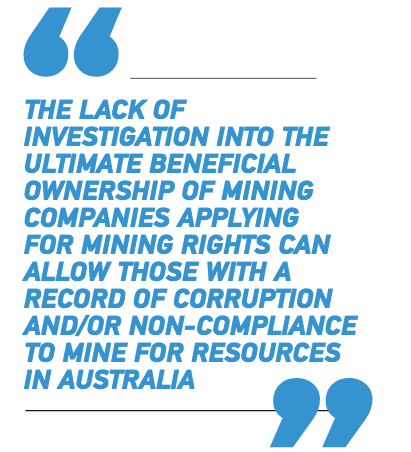 The report notes that both the frequent movement of staff between government and industry, and the inadequate regulation of political donations and lobbyists may enable inappropriate influence to be exerted in the project approval process.

TI considers the risk of policy influence by mining companies in Queensland to be high, especially considering the wide discretion granted to the Coordinator-General in relation to approving and facilitating large mining and infrastructure projects under the State Development and Public Works Organisation Act 1971 (Qld) (SDPWO).  In Western Australia, ministerial discretion to grant mining leases and exploration licences under the Mining Act 1978 (WA) may be susceptible to industry influence, but this risk is mitigated by media scrutiny, the presence of integrity bodies, and public reporting requirements. Industry Influence may, however, play a more prominent role in the context of State Agreements, which is discussed below.

In negotiating agreements with mining companies, native title representatives appoint a negotiator who may fail to represent their interests.  Mining agreements with native title parties have limited transparency and there is a risk that compensation negotiated with mining companies may not be distributed to the wider group in whose name the land use agreement was negotiated. The implementation of the terms of a land use agreement are not publicly monitored.

TI is concerned about the lack of transparency in the negotiation of such agreements. There is no public notification of the terms of negotiation and an agreement is only publicly available upon ratification. There is no opportunity for public interest groups to have input into the terms of negotiations or challenge the final agreement in court. TI argues that State Agreements enable direct and undisclosed negotiations between industry and politicians, which creates considerable risk of policy capture and corruption.

Rent-seekers in mining, along with property and finance, are able to extract major benefits for their industries and senior executives. We need only recall the power they waged with the co-operation of the Coalition and the Murdoch media to defeat action on a super profits mining tax and a carbon tax.

Rio Tinto, the company that led the charge against the mining tax and called the tax a “sovereign risk” has been charged with fraud in the US.

The defeat of the gold mining tax in WA also comes as no surprise. The powerful and wealthy miners win again and again by flexing their political muscle.

Given the enormous power and influence of the long “conga line” of rent-seekers, as described by Graeme Samuel the former head of the ACCC, it is not surprising that Australians are losing confidence in governments and business.  Our democracy is being subverted by politically powerful rent seekers in a wide field.

Both Labor and non-Labor governments have failed to tackle this entrenched corruption and undermining of public confidence. In fact, governments and particularly former senior ministers, even  former prime ministers and senior public servants, benefit from joining these rent-seekers on “retirement”.

We badly need some moral leadership on this question. We are not getting it from any of the major political parties. We need a Royal Commission on regulatory capture by powerful people and organisations, major changes in political donations, tough and transparent regulation of lobbyists and a standing anti-corruption commission — just for starters.