Is the ACCC protecting telco consumers or fattening up NBNCo for sale? Is the ACCC helping the Government get the best price for the sale of NBNCo? The competition regulators are doing consumers no favours hindering investment in new telco infrastructure. Who is looking after the interests of telco consumers? asks former NBNCo CTO Gary McLaren.

Despite the $60 billion plus investment in NBNCo, Australia lags far behind the world’s best in broadband speeds; no. 57 according to Speedtest.net, albeit a slight improvement on last years ranking of 68. Nor is it cheap, we rank 128 in the world on the basis of average monthly cost (Source: Cable.co.uk). Australian telecommunications consumers have many reasons to feel hard done by.

The Australian Consumer and Competition Commission (ACCC) is tasked with protecting consumers interest in general. But when it comes to telecommunications, it is increasingly unclear what its role is and how independent it is from Government influence related to the Government owned NBNCo.

The bungled intervention into the merger of Vodafone and TPG means the telecommunications retail sector is now completely dominated by Telstra, Optus and Vodafone/TPG. And they all have to buy broadband from NBNCo.

TPG and Vodafone: curious case of a telco merger thwarted

What is stopping these big players from getting together to extract undue profits from the humble consumers? How will the likely privatisation of NBN Co be managed to actually benefit consumers rather than just become another stitch up by the big telcos?

In October 2020, the ACCC was given an usual “Statement of Expectations” (SoE) by the Minister fro Communications, Paul Fletcher. The SoE was ostensibly issued to ensure that the ACCC, the Department and the Minister are all on the same page when it comes to updating the regulatory pricing arrangements applicable to the non-FTTP technologies. In setting these arrangements the ACCC is supposed to act as an independent, neutral umpire that takes as its primary objective the long term interests of end users of telecommunications services.

However, the SoE also indicates that the Minister, as one of the Shareholder Ministers for NBN Co, is looking to influence the outcome of the ACCC’s decision process in a way which seeks to maximise the financial prospects for NBN Co, thereby increasing possible future returns from the privatisation of NBN Co.

The ACCC is currently considering the long term pricing arrangements for NBN Co’s services to its customers (predominantly Telstra, Optus and TPG/Vodafone) through a revision of NBN Co’s Special Access Undertaking (SAU). There was even a behind closed doors get together of the the ACCC with these players at an ‘industry roundtable’ on 18 June.

Is the ACCC getting too cosy with the big players involved in the telecommunications industry? Why was such an important meeting conducted under Chatham House Rules rather than open to all relevant parties?

The pricing arrangements that the ACCC approves for NBN Co will be a critical factor in whether the government is able to re-coup a positive return on its investment in NBN Co. But consumers are generally best served by lower prices.

The higher the price that NBN Co charges, and that ultimately consumers have to pay, the higher the chance of a higher return for the government. As resellers, Telstra, Optus and TPG/Vodafone, just clip the ticket along the way.

The ACCC has also recently extended its regulation of small competitor broadband networks that build networks that compete with NBN Co. This regulation is unique in the world in putting additional regulations on new network investments by competitors to a dominant network like the NBN. The ACCC argues that this benefits consumers by ensuring that resellers are able to get access to these new networks in addition to the NBN. But the more likely impact is that it discourages new investments which benefits NBN Co at the expense of competitive tension, and increases the likelihood of the government getting a higher price for NBNCo.

This recent history of specific instructions to the ACCC from the government, closed door meetings on long term pricing arrangements for the NBN and continuing regulations on investments that compete with NBN Co does not bode well for the prospects of Australian telecommunications consumers.

Australian consumers deserve to have someone fighting for them in the important area of telecommunications. At it currently stands the only hope is the ACCC, but is its independence guaranteed given the current ownership of NBN Co and likely privatisation?

ATUG quickly became a key feature of the Australian telecommunications landscape. It sponsored large industry conferences that brought together key players in the industry to push the opening up of the industry. ATUG’s key push was to breakdown Telecom Australia’s monopoly and overall dominance of the market. The campaign was successful, as Optus and Vodafone became fully-fledged competitors to Telstra, followed the full opening up of Australia’s telecommunications market in 1997. Large new investments in mobile and optical fibre networks during the 1990s and early 2000s benefited businesses enormously. Most large businesses were able to ensure their telecommunication costs were decreased significantly as a range of service providers clamoured for their business.

Australian consumers did not fare quite as well. While some benefits definitely did ‘trickle-down’ to consumers in the big cities and larger regional towns through investments in mobile phone networks, broadband networks were slow to rollout after the demise of the Optus Cable TV network as a viable competitor to Telstra in the suburbs. Regional consumers were even worse off. Mobile and broadband network coverage was patchy and expensive. The National Party agonised over the privatisation of Telstra, but eventually the deal was done in 2005 when Barnaby Joyce was the last Senator to fold and give up any political leverage the National Party once held.

And in the end ATUG folded – closing it doors in 2011. With big business happy there was no desire to fund what was essentially a lobbying organisation that had completed its job. and consumers were again left in the lurch.

Today, consumer have only the Telecommunications Industry Ombudsman (TIO), to manage a complaints process for consumers, and the Australian Communications Consumer Action Network (ACCAN). The influence these organisations have over the industry does not come close to what ATUG achieved back in the 1980s and 1990s.

And then there is ACCC, who seems more focused on propping up the price of NBNCo than protecting Australian consumers. 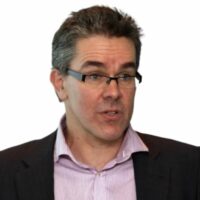 Gary McLaren is a telco industry consultant, he was the CTO at Hong Kong Broadband Network and the first CTO of NBN Co from 2009 to 2014.. He has worked in telecommunications for three decades and has degrees in engineering and law.