Far from free, gas is becoming the ‘risible’ market – all the way to the bank 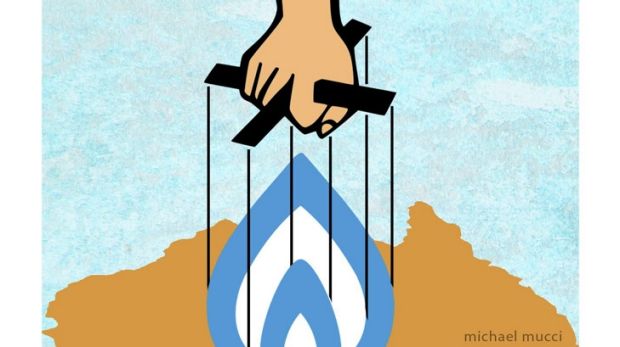 Adam Smith was right, a free market is best. If there is no market however, there can be no free market.

Such is the case with gas. Notwithstanding the cries from assorted business groups for a free market, for “market based solutions”, there is no gas market. It is a cabal.

They pay less than $2 a gigajoule (GJ) for domestic gas in Qatar, the world’s second largest exporter after Australia. In the US, prices are well under $4/GJ, and ironically in China, which sources its gas from Australia, it costs $A5/GJ to lock in supply until 2031. And that is for gas which has been liquefied in Queensland and shipped 3500 nautical miles on a 14 day trip to China.

While the Chinese are happily availed of cheap Aussie gas, consumers here have been stung with double-digit price rises and businesses are forced to stump up contract prices of $7.50 to $10/GJ. We could be more precise on these prices if there were a market. Typically, a market exhibits visible bids, offers and prices. Not so with gas. Prices, bids, offers, reserves; all are shadowy and anecdotal.

Peak bodies representing the users of gas: the Australian Industry Group, Manufacturing Australia, the Business Council of Australia and the Australian Chamber of Manufacturers, have all wrung their hands in despair at the escalation in gas prices.

No wonder, the consequences of high prices are acute: businesses shifting offshore, closing down. Incitec Pivot chief executive James Fazzino described national energy policy as a “train wreck” last year upon unveiling his company’s decision to build a $1 billion ammonia plant in Louisiana rather than Australia.

Manufacturing Australia has just warned the manufacturing sector, “is projected to decline by up to $120 billion by 2021 unless this issue is addressed urgently, with projections also suggesting between 13,000 – 83,000 direct manufacturing jobs are at risk”.

Further to the absence of buyers, sellers and a price, this faux “market” for gas is controlled by a diminishing number of big players.

What we have here then is a small number of players keeping domestic price well above global prices and issuing scary statements about gas shortages while they engage in “joint marketing”, a virtual euphemism for market-rigging.

Despite the evidence however that this cartel has deliberately driven up prices in the face of an abundance of gas, and now falling demand, the recommendation from the business lobby is for a Utopian, 1930s-style free-market solution.

“More suppliers,” says MA. Nice idea but the number of players is actually shrinking. Shell – with the largest undeveloped reserves of gas in Queensland – has made a £47 billion ($90 billion) takeover bid for British Gas, a dominant East Coast producer with a 74 per cent stake in one of the LNG export terminals at Gladstone.

Develop “new sources of gas on the East Coast”, urges the Business Council. Nice idea but the underlying message here is: “let’s tear up valuable farmland with coal seam gas projects which are environmentally risky and bitterly opposed by local communities.”

As disclosed by AGL in a research paper which warned of a looming gas “supply cliff” – a cliff now turning pipe-dream – the current well-head costs estimated for the Gloucester Project (AGL) and the Pilliga Project (Santos) are the most expensive on the East Coast at $8GJ.

That they are still pressing ahead to frack this expensive gas is quite weird, especially in light of the reputation damage wrought by CSG extraction. Domestic prices are only likely to rise further as they scramble to recover their costs.

The fact is Australia has an abundance of gas, as shown earlier this month when AGL quietly informed the ASX it had locked in new supply from Esso and BHP in the Bass Strait.

While others were talking up shortages and impending crises last year, BHP Petroleum chief Mike Yeager, told journalists: “We want to make sure that the market knows that the Bass Strait field still has a large amount of gas that’s undeveloped … We have a lot of gas in eastern Australia that’s available. It’s more important to let the citizens of Victoria and New South Wales, and to some degree, you know, even Queensland … there’s plenty of gas to supply those provinces for – you know, indefinitely.

“We have gas for sale and we will work with anybody at any time,” he said.”

What is lacking in this so-called market is transparency. There is no clear picture of reserves but BHP is using words like “indefinitely” while prices have now run so high that demand is on the wane.

That demand for gas is falling, though prices remain high here while world prices cascade lower, is further proof of market failure. Same deal in electricity where demand has been falling while prices have doubled.

The business lobby is playing straight into the hands of the gas producers with its calls for a free market. There is no market and the “invisible hand”, as Adam Smith would have it, is really a “risible” hand with a small cabal of gas suppliers “risible” all the way to the bank.