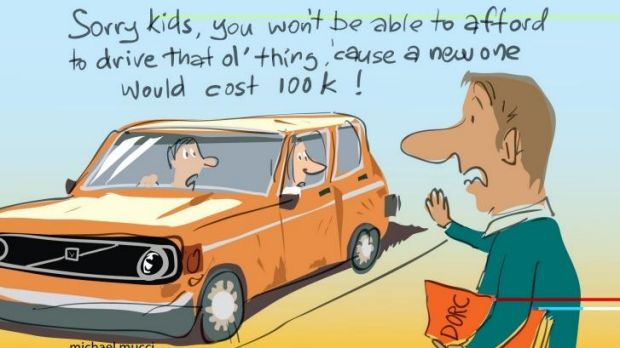 Select your preferred relaxation technique – a few deep breaths,  a stiff drink perhaps, or some yoga – for you are about to hear how you have just paid for something twice.

Worse still, you will hear how you have been paying for something, on a quarterly basis for the past 10 years, which you have already paid for. We are all victims of a high-brow rort by governments and energy companies. “The whole idea of basing user charges on the imaginary current replacement cost of an asset that already exists is ideological claptrap. It says that you tell your kids that they can’t afford to drive the old Volvo in the yard because a new one would cost $100,000.”

So it is that energy companies are valuing old assets such as gas pipelines – things that consumers have already paid for – as if they were brand-spanking new. We, the mug punters, are lumbered with the cost on our power bills.

Suffice to say that a reasonable thing for regulators to do might simply be to value assets at their cost, or to recognise only what their owners actually spend. Suffice to say that in Singapore and Hong Kong they would not be silly enough to use DORC, yet large corporations from these places are here enjoying riskless 10 per cent returns by stinging we mug Aussies twice for access to old gas pipelines, things that were paid for, and privatised, years ago.

Imagine the government wanted to raise some money, Johnstone says, so it decided to privatise the Sydney Harbour Bridge. This is how things would be done using DORC.

First, you would pay consultants to work out what the bridge would cost to build today. You would need imagination to value the real estate required for hypothetical purchase around Kirribilli and The Rocks. Bearing in mind that the company paying you for your opinion is desirous of the highest figure possible – because it is this figure that determines how much it earns – you arrive at your number from the stars. Let’s call it X.

“Then we allow for the fact that the bridge is slightly depreciated but, because of its very long projected life, we say it’s pretty well intact,” Johnstone says. “So we take the whole of that number X as the ‘regulatory asset base’, known as RAB. Then we think … what return should the owner get on this?”

It is imperative that some consultants are hired to identify the risks in owning such a bridge. There is the risk of a terrorist attack, of course, which is big at the moment. Then there is a regulatory risk – that regulators “might be less friendly”, as Johnstone puts it, at some point in the future.

“And we think of what returns truly commercial [i.e. truly risky] businesses typically require, and we settle on something like 10 per cent. So now all that is left to do is to worry about the new owners’ running costs, maintenance and so forth, and we add those.

This is fair dinkum. Johnstone is not making up this stuff.

“This is the periodic revenue that the regulator’s formula allows, and which will be apportioned over all the users of the bridge. Tariffs will be worked out so as to net this amount in total.”

The thing is, there is no risk. Not in a normal business sense, at least; only in the sense that one day people could realise they are being duded.

Why do governments acquiesce to DORC? The engineers who estimate the current replacement cost of the bridge are paid by the owner and know that the bigger the number is the better for all those involved, Johnstone says.

States get more for asset sales; power companies earn more from the regulator; their executives get higher bonuses, and expert valuation vendors are rewarded for their sage valuations.

There is no chance they will ever be tested: the bridge won’t have to be rebuilt, it will just sit there, Johnstone says.

“The alternative and despised way of thinking, at the other extreme, is that the bridge cost is a ‘sunk cost’ and the bridge is sitting there and can be used at essentially just its maintenance cost.

“No need for users to pay a big usage charge based on some economists’ contrived formula. This approach would be based on the idea that if we keep usage costs lower, then all those who depend on the asset can build their businesses and employ people, rather than having to move somewhere else to avoid the bridge prices being charged.”

But why are assets that are already in private hands given the same favourable regulatory treatment? “I think it comes down to ideology as well as vested interests,” Johnstone says. “Economists fall in love their own models and crave the authority of being scientists.”