Photo by Mae Mu on Unsplash

Is the DAA back to its old tricks? After investigations here into food giants such as Nestle and Sanitarium financing the Dietitian’s Association of Australia (DAA), the peak dietitians body cancelled its sponsorships program. Maryanne Demasi reports the DAA has again compromised its independence from Big Sugar by inviting advertisers.

The DAA’s credibility was challenged after we revealed the organisation was “educating” its dietitians with learning materials and resources that had been sponsored by food industry giants like Nestle, Kellogg’s and Sanitarium.

Secret documents showed the DAA took payments from a cereal industry front group which tried to influence public perception by sanitising negative messages about sugar laden breakfast cereals and attacking doctors and journalists who spoke publicly about the health risks of sugary foods.

Then, in a surprise move, the DAA announced it would cease its corporate partnerships with food manufacturers and food industry associations by the end of 2018.

Many praised the decision and perceived it as the DAA’s renewed commitment to the dissemination of independent dietary advice. But the DAA is still inviting commercial companies to ‘advertise’ with the it, casting doubt over the DAA’s assurance of independence.

Back to its old tricks?

The website invites commercial organisations to “advertise” with the DAA, promising “unparalleled opportunity to reach more than 6000 dietitians”. It also says these organisations can “send written material” and “resources” through mail-outs, boasting that it will reward them with access to “the most influential group of healthcare professionals in the Australian food and nutrition space”.

This has raised alarm bells with critics who say this is nothing more than sponsorship disguised as advertising and that the DAA’s announcement to end its corporate partnerships now seems more like a stunt to garner goodwill. 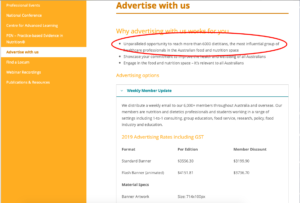 The DAA justifies its decision to allow advertising by commercial organisations stating that it, “allows our members to stay up to date on a range of products and services that are available within the food and nutrition space. It is the responsibility of [dietitians] to evaluate information provided to them in whatever form and apply the information using their professional judgment.”

The DAA goes to great lengths to distance itself from any responsibility over the content of its advertising.

It says, “DAA takes no responsibility for the content/accuracy of any advertisement” and that “by accepting advertising, DAA is not endorsing or otherwise agreeing with the materials or activities of the clients.”

“Whether the DAA likes it or not, acceptance of advertising gives the appearance of endorsement” says Dr Nestle. “If nothing else, it suggests that the DAA has no particular concerns about any of the products made by the advertiser. I’d call that an implied endorsement.

“From my standpoint, this looks like the DAA has been captured by the food industry and must be viewed as a collaborator in food industry marketing objectives,” she said.

When asked whether the DAA had breached its promise to the public, Dr Nestle stated, “Looks to me as though the DAA is acting as an arm of the food industry and putting income over its responsibility to public health”.

Health economist and dietitian Melanie Voevodin agrees. “What really concerns me is that the DAA appears to be ignoring the evidence that advertising, branding, gifts and gratuities do have an influence on the profession”, says Voevodin.

The DAA would not disclose a list of its advertisers, nor would it reveal which food companies were paying for the “unparalleled opportunity” to access its 6000 dietitians.

Instead, it defended its decision stating that, “all information provided to members via communications is subject to an approval process”.

The DAA refused to be drawn into answering any questions about who approves or how it determines whether advertising is evidence-based. Ms Voevodin called for more transparency:

“It’s important for DAA members to know what these processes are, so they are able to make informed decisions, but the DAA does not disclose this information to its members,” says Voevodin.

“Why aren’t 6,000 members outraged by their professional association’s relationship with the food industry?” In light of the DAA’s refusal to answer our questions about the extent of its food industry advertising, the credibility of the dietitians’ association still looms under a dark cloud, according to many experts.

Dr Maryanne Demasi is an investigative medical reporter with a PhD in Rheumatology. She has done a number of important stories for michaelwest.com.au including investigations into the infiltration of the medical profession by processed food companies and the over-prescription of statins. 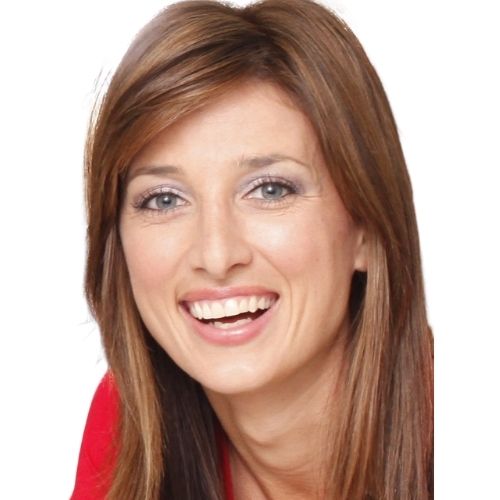 You can read more about Dr Demasi’s work on her blog, or follow her on Twitter @MaryanneDemasi 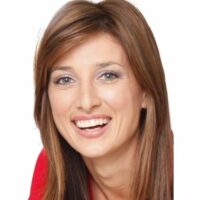 Dr Maryanne Demasi is an investigative medical reporter with a PhD in Rheumatology. She has done a number of important stories for michaelwest.com.au including investigations into the infiltration of the medical profession by processed food companies and the over-prescription of statins.