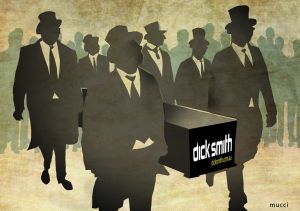 A phalanx of forty lawyers will parade into a Sydney courtroom this morning to spar over the scraps of electronics retailer Dick Smith. The damage of a corporate collapse – the hit to creditors, shareholders and taxpayers – will be on display.

Almost 3,000 employees lost their jobs. The private equity sharks from Anchorage Capital, who are said to have spent roughly $10 million of their own money to buy Dick Smith before floating it on the Australian Securities Exchange for $520 million, have made off with their proceeds from the float.

Besides a hill of debts and a slew of legal claims, all that’s left of value in Dick Smith is an insurance policy. That’s why the lawyers are there, lawyers for receivers, auditors, directors, banks and shareholders; at a guess, eight firms with two solicitors and a couple of counsel apiece.

While the Royal Commission into the banks is due to hear ongoing evidence of aggressive behaviour by the banks in Melbourne, in Sydney the Supreme Court will hear of other aggressive bank behaviour first hand.

Receivers for the banks, HSBC and National Australia, are trying to cut the two Dick Smith class actions out of the picture, apparently on the principle of “first in best dressed”.

Council for their receivers told the court on March 8 they should get the money first and they wanted the class actions to fail. Apparently, the banks believe they have right to use the courts for their commercial advantage.

“There is a pot no doubt being rapidly eroded of $150 million … the banks are owed about $90 million, give or take out of pocket (sic).

“This company listed in late 2013 with a market capitalisation of slightly in excess of $500 million I think, now it’s worth nothing. Now I don’t know how big the classes (shareholder actions) are that is not known to me or how many people have got in it and how many trades in that but one can see that there is a very little prospect to say the least, a competition on these policies. My interests are not the same as those to my left, they are diametrically opposed. I would like them to lose.

“To the extent that I recover dollars off the bank debt, again I am duty bound to want the classes to lose for the rest of the unsecured creditors.

The claims rely on the same or similar facts, misleading and deceptive conduct by the directors Nicholas Abboud and Michael Potts – misleading the ASX about the nature of Dick Smith’s inventory among other things.

As the receivers’ and liquidators’ hefty fees click away, the professional mouths to feed are growing too. The banks have served 21 lay witness affidavits and three expert reports.

When the claims finally proceed, it is likely the investigating accountant Deloitte, legal advisors Minter Ellison and perhaps the joint lead-managers to the float, Macquarie and Goldman Sachs, could be drawn in along with executive directors and the private equiteers who masterminded the deal, Anchorage Capital.

Anchorage acquired Dick Smith from Woolworths for $94 million in September 2012. It floated for $520 million fifteen months later and collapsed in January 2016, leaving creditors $260 million out of pocket.