Coalition awarded $35m science funding in their own name

The Coalition government has announced a new Cooperative Research Centre (CRC) which is to receive $35m of taxpayer funding. However, notice of this funding has come directly from Coalition campaign headquarters with Coalition election branding.

Sources claim that this notice for the Solving Antimicrobial Resistance in Agribusiness, Food and Environments (SAAFE) CRC was sent to researchers on Friday, May 6. The notice claims that the “Morrison government”, not the federal government, is the body providing the funding. 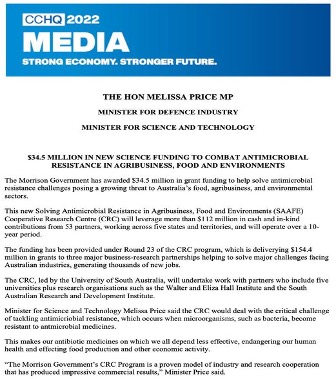 This information hasn’t yet appeared on any government website, but similar info was announced on Cooperative Research Australia’s site.  The media release was branded with CCHQ, standing for Coalition Campaign Headquarters.