Should the Narrabri project get the green light, high levels of CO2 will be vented straight into the atmosphere, hardly the credentials for a “low carbon” transition fuel claimed by Santos in its 2020 Climate Change Report. Chemical engineer and energy industry veteran, Dr Andrew Grogan reports.

It is no surprise that one day after Michael West Media published a report challenging Santos claims about high CO2 levels from its proposed Narrabri Gas Project, Chairman Keith Spence had a response ready at the Annual General Meeting on Friday, 3 April.

Santos continues to claim all gas used for electricity generation is a clean transitional fuel, even invoking Chief Scientist Professor Alan Finkel who has previously suggested this might be true, although not in Australia.

Nothing could be further from the truth because at Narrabri, very high levels of CO2, previously undisclosed, will be released direct into the atmosphere, a useless by-product of coal seam gas (CSG) production.

A recently published report by North West Protection Advocacy (NWPA) used close to 1,000 gas sample points from wells in the proposed 850 gas well area, and concluded that the average reported CO2 content in CSG for the project is 25%-30% in coal seams targeted by Santos.

According to the Environmental Impact Assessment for Narrabri gas, this CO2 would be extracted from the CSG and simply vented into the atmosphere, resulting in annual greenhouse gas (GHG) emissions estimated by the NWPA report to be nearly 1.7 million tonnes of CO2. This would considerably increase the carbon footprint of the Narrabri project, and flies in the face of the shock minority shareholder action pushing for a low carbon pathway for Santos. CO2 % in coal seams targetted by Santos at the Narrabri Gas Project, showing the Hoskissons formation, and the deeper Maules Creek seams referred to by Santos Chairman Keith Spence at the AGM.

Why are CO2 levels in Santos’ gas gaining so much attention? For one thing, Santos states that it will produce 70 petajoules annually of methane at Narrabri. High CO2 levels mean this figure is overstated, a significant matter for shareholders and anyone who is looking to the Narrabri Gas Project to resolve energy shortages in NSW. The other crucial matter is the cost impact of extracting 25% CO2 to obtain the methane for market.

Responding to a question on whether the Santos Board was aware of high levels of CO2 in its CSG, Mr Spence said:

“Yes we are aware of that, …the assumption that 10% CO2 in the EIS is actually a conservative estimate. Typically when you put an EIS together you try and paint a fairly bad case to make sure you really kind of stress test it. The actual Narrabri exploration and appraisal data from around 250 gas samples that were taken across the area between 2014 and 2019 have an average CO2 content between them of just under 5%, not 10%.”

Santos is asking shareholders to trust that only gas testing of 250 samples done between 2014-2019, none of which is publicly available or capable of being corroborated, is a reliable predictor of likely CO2 content of Narrabri gas. This is compared with the NWPA study, which used twenty years of data from 26 wells, and nearly 1,000 samples.

The Santos Chairman went on:

“… the areas were we would expect elevated levels of CO2 are typically in the shallower coal seams, where we’re not really interested to be quite honest with you”.

This is actually contradictory to the Santos project EIS, which states:

Santos’ targeted Hoskissons coal seam is one and the same as that being mined for coal at the nearby Narrabri Underground coal mine with up to 90% CO2.

Inclusion of all gas sample data from 1998, when the first CSG well (Bohena 2) was drilled, until 2014, clearly shows that high levels of CO2 are prevalent in the main Santos target seams in wells over much of the project area. There are some areas with low CO2, but this cannot be said of the whole project area.

The science of predicting when the CO2 in the gas will flow to the surface during production is still in its infancy, but high levels of CO2, will ultimately be produced, and if the project goes ahead, will be vented straight into the atmosphere — hardly the credentials for a “low carbon” transition fuel. Comparison of CO2 levels in the shallow Hoskissons (red) and deeper Maules Creek Formation (yellow) at Narrabri, contradicts Santos’ claims at the AGM that the lower coal seams have lower CO2 levels.

One thing is certain, shareholders showed the Annual General Meeting that they are watching Santos’ greenhouse gas disclosures like hawks. Keith Spence’s argument that Santos is looking for gas somewhere which is not indicated in the NGP EIS will weaken confidence even further and requires that the NSW Department of Planning make available the data on which Santos is basing a low CO2 number. 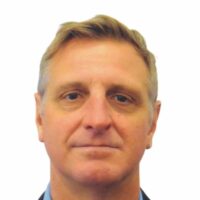 With a B Eng and PhD, Dr Andrew Grogan has over 25 years international, commercial and technical experience in the energy industry, in energy conversion and with large integrated energy projects. His undergraduate degree specialised in fuel engineering and energy production. His PhD was in carbon dioxide processes in underground reservoirs.