In the words of one of the world’s most popular memes:  “keep calm” folks about the coronavirus. What does worry regular contributor and medical specialist, Dr James Freeman, is the media making a mountain out of a molehill in respect of 2019-nCoV. I’m a doctor, and over the past few weeks, I’ve found myself needing to reassure my patients that the 2019 novel coronavirus is not really something that should be keeping them awake at night, nor should they keep their children out of school or, in a recently reported example, that holding your breath while in a lift with a person of Asian appearance is required.

How could I offer up such advice? Surely I should be reported to the medical regulators for irresponsible behaviour, after all, the WHO has declared an emergency, Australia has been flying our citizens out of China and quarantining them, etc, etc, etc.

Let’s just step back for a moment and draw a big deep breath.

Coronaviruses are not new and nor are the infections caused by them. Each year around 1 in 4 of the things we call “common colds” are caused by four other coronaviruses. If this novel one becomes established that will make the count five. Some people are using the words “just another coronavirus” and, on the evidence to date, I tend to agree.

While every single death due to infectious disease is one death too many, this new coronavirus is far more likely to the cause the symptoms of a common cold than the sort of pneumonia which places your life at dire risk.

If we consider the mortality rate due to SARS and MERS (two other coronaviruses) we will see that SARS caused a total of 774 deaths and MERS has caused 858 deaths to date (MERS is still in circulation). A recent headline in the New York Times said “Death Toll in China Exceeds That of SARS Outbreak” so it’s easy to understand why people are worried, but let’s get some perspective.

If we compare these coronavirus mortality numbers to something more familiar we can see that in a good year around 5000-10,000 people die every single week from influenza. In a bad year, such as the H1N1 pandemic in 2009, that number doubles or triples. You will notice the weekly mortality due to influenza is much higher than the total death toll to date from 2019-nCoV over a period now running into months.

The other day I saw an article called “A Test Predicts Your Death Date: Should Insurers Find Out?” It was based on this study published in Nature. The article posed the question

“If you could find out when you were going to die would you want to know?”

My personal answer to this was no but, given none of us are getting out of this life alive, what are some of the real sudden death health risks to worry about? Around the world, every year, the number of people:

It’s worth noting that according to the WHO, influenza is not even near the top of the list of causes of infectious disease death. TB, malaria, HIV, Hepatitis B, Hepatitis C, measles, tetanus and whooping cough all kill more people than influenza. Fortunately for us here in Australia most of these diseases are rare, thanks in large part to freely available, government-funded, vaccination.

I guess it’s because humans are irrational that my biggest fear is the thing least likely to cause my demise. From time to time I jump in the ocean and simply can’t help the feeling of fear a big shark cruising by causes. While I blame Steven Spielberg and the movie Jaws for that emotion I do worry that the current media landscape is making a mountain out of a molehill with respect to 2019-nCoV.

Life is a gift, and every day is a blessing. One day something will catch up with each and every one of us, but, the simple reality is that thing is rather unlikely to be 2019-nCoV.

As Mary Schmich said, and Baz Luhrman immortalised in the Sunscreen Song:

Don’t worry about the future. Or worry, but know that worrying is as effective as trying to solve an algebra equation by chewing bubble gum. The real troubles in your life are apt to be things that never crossed your worried mind, the kind that blindside you at 4 p.m. on some idle Tuesday. 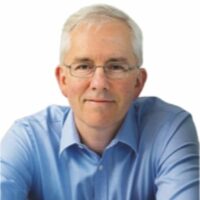 Dr. James Freeman is the founding owner of GP2U Telehealth and an executive director with responsibilities for platform development and clinical oversight. He brings 20 years of clinical and information technology experience to the company.

James has a B.Sc. and MB,BS from UTAS and is on the Dean’s Roll of Excellence for outstanding academic achievement.