Frydenberg hides $30 a week tax increase for most Australians Despite the federal budget’s focus on cost of living measures, the typical working Australian will still be $50 a week worse off. This is before a hidden tax increase that will leave low and middle-income earners, who are facing a tidal wave of extra costs, $30 worse off in the next financial year. Callum Foote reports.

Treasurer Frydenberg announced a number of cost of living measures in his budget speech.

What the Treasurer didn’t say is that the additional $420 tax offset for low and middle-income earners he mentioned will stop entirely at the end of this financial year, on June 30.

The extra cash bumps the tax offset up to $1500 this year which ends on June 30.

This means that despite the extra cash given to them this year, those on this tax offset will be $1500, or almost $30 per week, worse off.

The cut to the fuel excise will be 22 cents per litre, a welcome but temporary reprieve, though industry bodies have calculated that the average cost per litre has risen 38 cents since the Ukrainian invasion.

On top of the cost of fuel and vanishing tax offsets, Australians are looking down the barrel of a superannuation contribution increase which is likely to come out of their take-home pay and mortgage interest rates which are likely to be raised and will increase the cost of living for the majority of Australians.

Adding up all these costs, the typical full time working Australian, on $85k per year, will be an estimated $50 a week worse off after-tax with this budget only relieving this burden by $20.8 per week.

Combined with the very low levels of wage growth workers have experienced in recent years, with the December quarter seeing just a 0.7% increase according to the Australian Bureau of Statistics, this budget fails to keep Australians afloat.

Here is a breakdown of four of the major problems which are taking money off the kitchen table.

LAMITO is an acronym that’ll make most voters’ eyes glaze over but when it runs out in three months it’ll mean $30 a week less on the kitchen table.

The problem is that this is set to run out at the end of this financial year, June 30.

By not extending LAMITO for another year, as they did the last budget, the government has failed to find a way to plug this hole in the weekly household budget.

Something that Australians will realise come July 1, when they find themselves $30 a week worse off.

Unfortunately, vanishing tax cuts aren’t the only difficulty facing Australians. The amount that bosses will need to contribute to their workers’ super will increase from 10% to 10.5% at the start of the next financial year, just as the tax benefit stops.

While this might sound good for those mindful of saving for retirement, the increase is likely to come out of take-home wages.

The Grattan Institute has found that “workers overwhelmingly pay for increases in compulsory superannuation contributions through lower wages” with roughly 80% of the cost of super increased being passed onto employees through lower pay.

For those on the median income: take another $8 off the kitchen table every week.  Now you’re around $28 worse off.

It’s not over yet! The Reserve Bank (RBA) has made it very clear that those with a mortgage need to get ready for rising rates. Some say it will start as early as June when the RBA meets.

This will hit almost all Australians, through higher mortgage interests which will, in turn, hit those renting.

This rise will most likely be by .25% which will equate to around $29 per week on the average Australian mortgage size of $600k.

For those on the median income: take another $21 off the kitchen table every week. Now you’re around $49 worse off.

Last but not least, the cost of fuel has soared since Russia’s invasion of Ukraine. The Australian Institute of Petroleum says there’s been a 38 cent per litre increase, making petrol $19 more expensive on 50 litres of fuel per week.

Frydenberg’s temporary 22 cents per litre fuel excise cut will alleviate most of this, leaving petrol prices just $8 higher since the invasion.

What does it all mean?

The final figure for the costs that Australians are seeing in their everyday lives is staggering. A moderate estimate based on ending tax offsets, rising interest rates, increased super contribution and higher fuel prices show that those earning the typical full-time workers’ salary of $85k will be $62 worse off each week in the new financial year, even with this budgets cost of living measures. 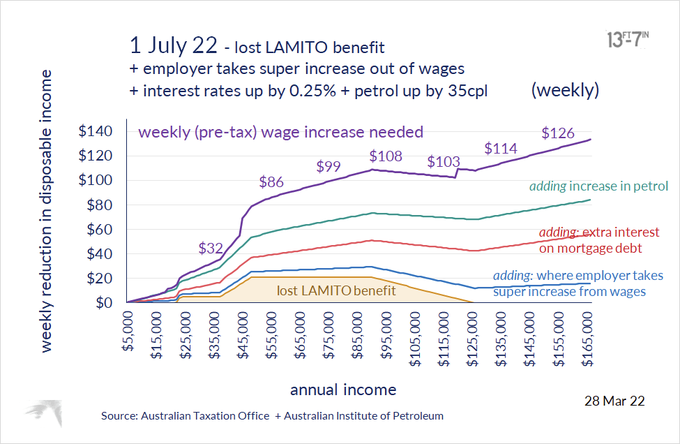 The green line on the accompanying chart shows the likely hit to your family budget, straight off the kitchen table – it’s no longer there to pay this month’s credit card.

What sort of wage rise do I need?

Wages will have to rise significantly if Australians are to remain where they are now.

Considering the various tax brackets in place, Australians will need to get an additional $32 to $126 pre-tax income from somewhere just to tread water in the next financial year.

This is without considering the rising prices of shopping bills and other household items.