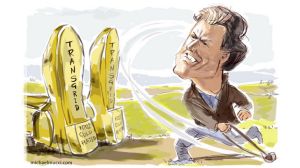 BRUCE Robertson, beef farmer from Burrell Creek – community hall, one house and a phone box – notched up another win against the electricity juggernauts this week.

Readers may recall that Robertson – a critic of ”gold-plating”, or excess spending by the networks, which drives up our power bills – had been threatened with a lawsuit by Grid Australia.

The contretemps harks back to early last year when Transgrid unveiled plans to run a column of 330,000 volt coat-hangers up the valley near Robertson’s farm. Robertson accused them of gold-plating. They muscled up and threatened to sue him.

But there was a slight hitch. Grid Australia is a peak body, a front for the state transmission giants. And governments should hardly be suing their own citizens.

Robertson declined to be muzzled anyway. That was the slight hitch. A more glamorous hitch was to come.

A search of the ASIC database showed the ABN number for Grid Australia Limited was registered to a Daniel Rosenberg of Caulfield South in Melbourne. Born Israel 1974, Rosenberg was sole shareholder of Grid Australia, and its sole director.

Vainly pining for a Mossad connection, we tracked him down. No, Danny, a graphic designer by trade, had never heard of Transgrid, nor SP-Ausnet, ElectraNet, Powerlink, Transend Networks or Western Power for that matter, or their lawyers Ashurst.

”I’m Grid Australia. That’s my company,” said the real chairman of Grid Australia, sporting his funky white-rimmed glasses. ”You say that someone is using my actual ABN number?”

The Bruce and Goliath story had its denouement this week when the Australian Energy Regulator condemned Transgrid for its Stroud to Lansdowne transmission line. There was no justification for the $160 million project, said the AER.

It followed admissions in January in a NSW report that it was, ”difficult to gain a complete understanding of the reasons for the promotion of a 330kV solution”.

Gold-plating is no conspiracy theory. The question is: how many billions have been sunk around the country in these souped-up projects?

The structure of the business is the fatal flaw. Thanks to their ”regulated-return” model, the more the networks build – and the more they spend – the higher their financial return. Like the investment adviser on a cut of a client’s gross assets, the temptation to leverage is too high. Like liquidators and lawyers, these guys can set their own prices. For consumers, it’s deadly.

TELSTRA, like the banking and supermarket cartels, may soon encounter the paradox of success. Such may be an exotic experience for the lumbering telco but Telstra is braining it right now at the expense of its rivals Optus and Vodafone.

It signed up 600,000 new mobile contracts in the last half year (it counts each SIM) and 80,000 internet customers. Tearing up his rivals’ market share is a good look for Telstra chief David Thodey but the price of success may be heightened political sensitivity, even the spectre of further regulation.

Vodafone announced a new call centre in Tasmania yesterday, albeit spurred on by government handouts. While this will create 750 jobs on the Vodafone Isle, Telstra is busy ”offshoring” 400-odd Sensis jobs to the Philippines or India.

Sensis originally proposed 200 jobs go and put this to the Telstra board in late November but Telstra rejected it and a subsequent proposal with a higher figure. Despite cries by Sensis executives that a move to offshore 391 jobs and cut the rest of staff might damage customer service, Telstra implored them to ”do better”. With a gun to their head they came back with the 648 job cuts that were announced late last week.

There is now a mutinous passion in senior sales ranks. The pressure has been on Sensis since the directories business came under attack from Google – yes, that’s the Google Australia that paid a $74,176 tax last year on its $1 billion revenue, well in excess of the salary of a Filipino call centre operator.

Sensis still throws off $390 million in profits. In recognition that speaking to an Aussie has a value, Sensis is keeping its ”account managers” for those customers who spend more than $40,000 a year with them in Australia.