Confounding the familiar government narrative of reckless spending binges by Labor, the Coalition actually has the record of greater profligacy when it comes to showering billions of dollars of taxpayers’ money on external consultants.

When John Howard became prime minister, he axed 30,000 employees from the public service. But in his second and third terms in office, public service numbers rose again. They continued to rise under Kevin Rudd’s Labor government, only to taper off during Julia Gillard’s tenure and drop sharply under the present Coalition government.

Consultants’ fees, however, after rising under Howard, eased back under Rudd before falling by more than 30% under Gillard. They rose again the moment Tony Abbott assumed office, and have continued to rise, albeit more modestly, under Malcolm Turnbull. 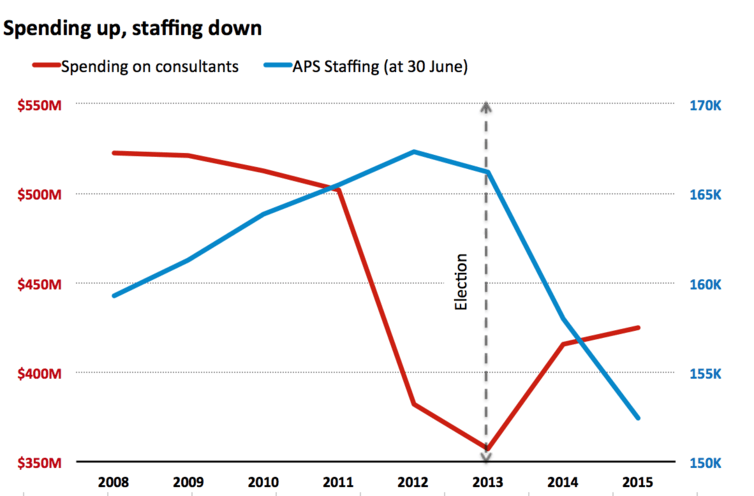 How will government look in 20 years?

Such is the pervasive influence of corporations and consultants over government and the de-skilling of the public service (as evinced by the recent slew of IT debacles) that Australia appears headed down the road to full-blown corporatocracy.

If they rely further on external parties for expertise and policy advice, governments – both state and federal – are likely to be emasculated, entirely laid at the whim of private vested interests.

With no expertise, let alone pricing power in negotiating external fees for expert advice, there will come a heavy cost to the public.

The devastating failure of Australia’s energy policy and spiralling prices for gas and electricity throw up a potent case in point.

It was recently reported that the Big Four accounting firms – PwC, EY, KPMG and Deloitte – picked up $2.6 billion over the past ten years for writing reports. That is from the federal government alone, to just the four top firms. They may have earned that again consulting to the states, though state disclosure is poor.

The crowning jewel in this cuff-linked fee-fest was a payment of almost $10 million, or $75,000 a page, for PwC to write its report on the future burden of welfare costs. This was the work that presaged the government’s strike on social security late last year and the ensuing Centrelink imbroglio.

Consultants’ reports deliver a licence for political action, an imprimatur. In light of the lavish fees, though, their authors can hardly claim to be “independent experts”.

Why could the Treasury not have penned this report? Why not the Productivity Commission? Surely, as bureaucrats, they are more independent, not susceptible to the tow of large corporate clients on the other side of a Chinese wall.

Is government captive to big business?

To put it crudely, many observers put the extravaganza of consultants’ fees down to “butt-covering”. This is just a ploy to lay the responsibility for political decisions, in case they go awry, at the feet of an external party. External reports can “test the water”, and can be tossed out without recrimination. They are so often a terrific waste of money.

There are two issues to consider then: one, the encroaching influence of private power over public policy; and two, the enormous expense to taxpayers in private firms penning reports that government departments and agencies could just as easily prepare.

Further to this rising sway of vested interests, there is also the incursion of corporate power in government in a physical way, via secondments.

Leading law firms, accountancy firms and banks often have executives spend time with a regulator or government department, but secondments are poorly if ever disclosed.

Then there are the “revolving doors” between industry and government: the passing of politicians, political staffers and the likes of mining lobbyists between industry, advocacy bodies and the public service. Governments are infested with industry people with vested interests.

As is the case with secondments, there is little in the way of transparency or decent policy in the arena of staff movement despite the inevitable influence it exacts over government policy. Not to put too fine a point on it, state and federal governments are infested with industry people whose influence on policy is undeniable.

While consultancies, political donations, secondments and staff movements magnify corporate influence over government, an equally sinister trend is playing out in the world of multinational corporations.

Many observers of the proposed Trans-Pacific Partnership have expressed alarm that the fine print to the TPP draft agreement contains Investor-State Dispute Settlement clauses, or ISDS as they are known. These are mechanisms that allow corporations to sue governments by claiming a change in a nation’s policies has adversely affected their business.

Indeed, more than 120 cases have been filed internationally under various “free trade” agreements. Water and waste management giant Veolia sued the government of Egypt for lifting the minimum wage. Canada is being sued for a ban on fracking. Germany was sued for its phasing out of nuclear power. All these actions were taken under ISDS clauses in free trade pacts.

Surely ISDS clauses, as anti-democratic and anti-national interest as they are, are concocted and consented to by bureaucrats and politicians perverted by the influence of the very same legal and advisory firms whose multinational clients stand to benefit from ISDS lawsuits. The game is stitched up. Transparency is key, yet there is zero public visibility of these machinations.

Tax, too, is an arena of supreme conflicts of interest. While heavy staff cuts have hit the Australian Tax Office under both Liberal and Labor governments, multinational tax avoidance is rife. And the very advisers to government on tax, the Big Four accounting firms, are the tax advisers to almost the entire global community of multinationals. The answer here is to split these firms along tax, audit and advisory lines.

No longer are these corporations “bodies corporate” with their own boards of eight or so directors whose duty is to serve the interests of the local corporate entity. Rather, they have gradually morphed into puppet regimes.

For instance, Shell used to be called Shell Australia. Now it refers to itself as “Shell in Australia”, and managed to make $60 billion in revenue over three years without paying tax.
The multinational formerly known as Shell Australia used to publish accounts, but now quietly files only the absolute minimum of statutory disclosures with the corporate regulator.

Across the board, local company directors have become “undisclosed agents” for their global headquarters, mere stooges expected to transfer pre-tax profits to tax havens every year rather than act according to the intent of Australian corporations and tax laws.

So, the big law firms and accounting firms that advise governments and reap billions in taxpayers’ money for doing reports have a conflict of interest as they act also for large corporate clients.

Should the world’s largest corporations continue to grow and the authority of governments and regulators continue to wither, ordinary citizens will bear the brunt of the consequences.

Over recent decades, rising inequality has accompanied the march towards corporatocracy. It is a relentless process of influence-peddling, complex financial transactions, cunning legal tweaks that evade public scrutiny and pernicious restructuring dressed up as “efficiencies” or “streamlining”.

In its attempts to cut costs, the Tax Office tried to introduce a scheme whereby the duty of tax compliance for Australia’s largest companies was outsourced to none other than the company auditors. The foxes were very nearly in charge of the henhouse.

Under what was innocuously dubbed the External Compliance Assurance Program (ECAP), large corporations were to have paid their own external audit firms – read the “Big Four” – to conduct their tax compliance work as well as the audit.

Along with the disasters of privatisation, such self-compliance regimes (the corporate regulator ASIC once espoused “co-regulation” with industry bodies) can only entrench corporate power at the expense of public interest. They don’t work. After all, it is the job of companies to make money and the job of regulators to regulate.

Together, captive regulators, a shrinking public service (smaller than it was a decade ago on the basis of permanent employees), the proliferation of consultants and the rise of lobby groups and political donations, alongside an obeisant and compromised media, have delivered policy stasis.

Significant reform in Australia, indeed significant reform by any Western government, is now fiendishly difficult. The tail is wagging the dog; the long tail, that is, of powerful vested interests whose purpose is wealth creation, not public interest.

Is the Adani tail wagging the Coalition dog?

Now, at a time when the Coalition is moving to cut social security benefits for the most needy, it is ready to sling $1 billion to Indian billionaire Gautem Adani to build the world’s biggest new thermal coal mine.

While the government struggles to fund the NDIS to assist the disabled – and in an age where underwater drone technology is viable – it is prepared to splash $150 billion to build, man and maintain a submarine fleet. Not a squeak of dissent from the federal opposition, for fear it might be wedged as weak on national security.

The icing on this cake of corporate welfare is the government trying to shunt through a $50 billion corporate tax package when its multinational beneficiaries don’t pay their fair share of tax in this country anyway – if anything at all.

These three policy decisions – corporate tax cuts, subs and fossil fuel subsidies – are enough evidence of the power of the hidden hand of corporate and political interests.

Last year the Turnbull government planned to sell off a key piece of the corporate transparency regime. Thankfully, the public spoke up.
This writer is no fan of a large public service per se, only of an efficient and independent public service, of public servants properly doing the job they were appointed to do. And a robust watch needs to be kept on procurement of consultants.

It may seem too late to arrest the inexorable rise in the influence of powerful corporations and the Big Four partnerships over government. Ironically, in the execution of this column, we met with much dithering and eventually stonewalling from the Australian Public Service Commission when attempting to request information.

That did not engender confidence. Yet, arresting the slide comes down to public awareness of all these things. Social media should help.

Only ten years ago corporate tax avoidance was not on the public radar. Now tax fairness has come to the fore; people understand that the richest institutions among us, those who can afford to pay the most, pay proportionately the least.

Efforts by politicians to hike the GST, lower corporate taxes or lift other taxes on ordinary workers are also loudly derided. Multinational tax avoidance is no longer a secret. It is now understood for what it is. The Double Dutch Irish Sandwich no longer bewilders; it is now widely debunked as a scam.

Public understanding and transparency are therefore everything. The public funds government, voters are entitled to disclosure, and they should demand it.

This column, co-published by The Conversation with michaelwest.com.au, is part of the Democracy Futures series, a joint global initiative with the Sydney Democracy Network. The project aims to stimulate fresh thinking about the many challenges facing democracies in the 21st century.