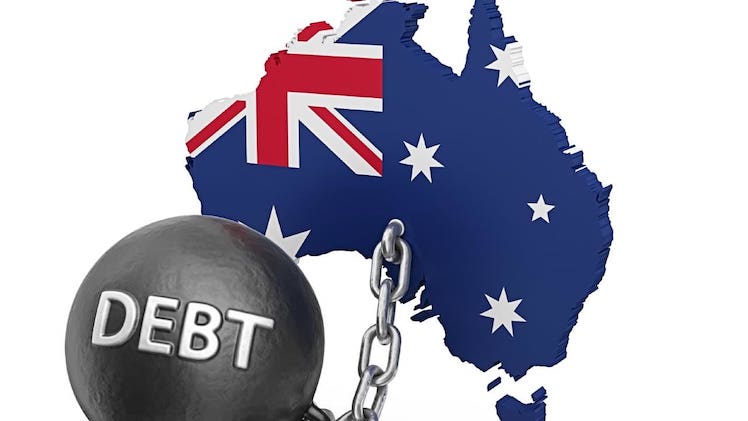 We need to talk about Australia's debt! (image courtesy https://australianfintech.com.au)

Yesterday, Scott Morrison said on announcing the election: “Labor cannot manage money”. John Menadue who served as head of Department of Prime Minister and Cabinet under both Whitlam and Fraser governments disagrees. It’s the Coalition, hidebound by an out-dated ideology about markets and private enterprise, who cannot manage the economy.

IN AN earlier post, I argued that the economy is a means to an end. It is not an end in itself. The economy must ensure and hopefully advance the health of our planet and our society. Unfortunately the government sees the economy as paramount. It believes that this will play to its strength. But the facts do not show that the Liberals are better economic managers.

Liberal Party performance is hindered by its out-dated view of markets and the role of government.

In an article in The Guardian on 19 March 2018,  Stephen Koukoulas, a research economist, after examining economic data, concluded:

“On both measures, the level of economic growth and growth relative to the US, Labor is a better performer than the Coalition. One of the weakest economic managers since the early 1970s is the current Abbott/Turnbull administration where GDP growth has averaged a mere 0.60% per quarter which is just 0.04 percentage points above the US performance.”

Only two Australian treasurers have been awarded the coveted Euromoney ‘Finance Minister of the Year’ award. Paul Keating won it in 1984 in recognition of the government’s role in structural reform. Wayne Swan won the award in 2011 in recognition of the government’s successful response to the Global Financial Crisis. It is unlikely that recent treasurers, Joe Hockey or Scott Morrison, would make the shortlist for this award!

But what about Peter Costello who because of his performance as treasurer in the Howard government is now treated by the media as a financial guru?

“Hit in the arse by a rainbow”.

With record revenues in boom times, Peter Costello introduced measures which have left a very serious and damaging legacy. Continuing chronic budget deficits are very much due to Peter Costello. The Howard and Costello government wasted the buoyant revenues of the mining boom.

The parliamentary budget office put this problem in the following terms.

Over two-thirds of the five percentage points of GDP decline in structural receipts over the period 2002/3 to 2011/12, was due to the cumulative effects of the successive personal income tax cuts granted between 2003/4 and 2008/9. A further quarter was the result of a decline in excise and customs duties as a proportion of GDP. Significant factors driving this trend included the abolition of petroleum fuels excise indexation in the 2001/2 Budget and the decline in the consumption of cigarettes and tobacco over the period.

As the Sydney Morning Herald reported on 1 January 2013, (‘Hey big spender: Howard the king of the loose purse strings’),  the IMF came to much the same conclusion. It identified two periods of Australian “fiscal profligacy” , both during the Howard turn in office — in 2003 at the start of the mining boom and during his final years in office between 2005 and 2007.

In short, our continuing structural budget deficit is due in substantial part to the Howard/Costello government’s laxity with government spending in its last years in office. We blew the benefits of the mining boom when we should have been doing more to improve the underlying budget position.

The Howard/Costello years locked in negative gearing concessions and generous treatment of capital gains which have been at great cost to the government in lost revenue and priced many young Australians out of the housing market.

There were also tax-free superannuation benefits, family trust concessions, franking credit rebates and a whole series of decisions on spending and tax that have caused continuing budget difficulties and the skewing of the tax system and the economy in favour of older generations. There really has been generational theft.

These tax concessions introduced by Howard/Costello cost the budget over $50 billion a year. We are paying a very heavy price for the budget damage that Peter Costello inflicted over a decade ago.

The Howard/Costello governments did pay down the debt it inherited by $96b but $70b came from asset sales and particularly from the sale of Telstra for which we are paying a heavy price today with the NBN mess.

The other major cause of the structural deficit is that the Rudd government spent heavily to counter the global financial crisis. It was more successful than almost any other government in the world in avoiding a major recession and unemployment, but when the recovery took hold, the Rudd and Gillard governments did not focus on the structural deficit problem particularly as identified by the Henry tax review. Some improvements were made to reduce middle-class welfare like the subsidy to private health insurance and the over-generous concessions that Peter Costello had given to superannuants. But the improvements were nowhere near enough.

“When Tony Abbott came to office in 2013, Australia’s net government

Since Tony Abbott became Prime Minister, the Coalition has been predicting that it would get rid of Labor’s debt. It hasn’t. When Tony Abbott came to office in 2013, Australia’s net government debt was $174 billion. It has now doubled to over $340 billion.

The Treasurer’s forecast of a budget surplus of $7.1 billion in 2019-20 would represent a dramatic turnaround in the budget position and reduced debt. His budget forecasts are based however on estimates of economic growth, wages, revenue and expenditure that are highly optimistic, even heroic.

The Government and Treasury have been far too optimistic about wage and economic growth for several years. Productivity is now growing more slowly than in the past. Household debt is now at a record level, 190 per cent of disposal incomes. None of that suggests good economic management.

The current budget states that the government has achieved $62 billion of “structural savings” since it came to office. This also is highly problematic. The Grattan Institute states that

Achieving such a reduction in spending would require significant cuts in spending growth across almost every major spending area, during a period when we know that an ageing population will increase spending pressures, particularly in health and welfare. There have not been enough significant savings measures in the past three years to explain the turnaround. … It appears to be more driven by assumption than by reality.

So much of the Treasurer’s figures lack credibility. They are designed for an election campaign and gloss over budget reality.

Tax receipts up $191 billion in 9 years on current policies https://t.co/h0VXohurQK

Bill Shorten has said that in the election campaign, he will show that Labor will produce “stronger surpluses and paying down national debt faster”. We will see, but the evidence so far suggests that he may do better in budget management than Scott Morrison..

Outside the budget context, the Coalition government has shown poor economic management in critical areas.

To top off this poor record in economic and business management we have an economy headed in the wrong direction. After thirty years of continuous economic growth we have a planet in increasing peril, our rivers that have become unhealthy and we are unable to afford the level of public services that we once had.

Trust is being eroded because we have placed economic interests ahead of the wellbeing of our planet and society.

One must then ask the question that despite the rhetoric, why does the Liberal Party has such a poor record in economic and business management?

The reason I suggest is that the Liberal Party has ideological blinkers about the role of government in the economy and particularly the need for appropriate regulation. Following the ideology of Reagan and Thatcher, the Coalition places far too much confidence in markets and lacks an appreciation of the appropriate role for government in our mixed economy. The Coalition is handicapped and hidebound by an out-dated ideology about markets and private enterprise. The tide has turned in the world that now sees the failures of the market system. The Coalition has failed to catch up. That is why we are seeing the failure of the Liberal Party in economic and business management. Its ideology has passed its use-by date.