Assange is still in jail – what can the new government do? There are signs that Prime Minister Anthony Albanese seems more interested in dealing with the plight of Julian Assange than was the Morrison government. UK Home Secretary Priti Patel has to decide whether or not to sign off on Assange’s extradition to the US by the middle of this month. Albanese must act now, writes Greg Barns.

Julian Assange is an Australian citizen facing over 170 years in a US prison for revealing the truth about US war crimes in Iraq and Afghanistan. His case is important for a number of reasons, including the inhumanity of keeping him locked up in the notorious Belmarsh prison in the UK as his mental and physical health declines. Assange’s case is an attack on freedom of speech. It also represents a dangerous development for citizens, journalists and publishers around the world because the United States is using its domestic laws to snare an individual who has no connection to the jurisdiction. This is the sort of law which Australia has condemned in the context of Beijing imposed laws on Hong Kong.

Tonight, the ABC broadcasts a documentary Ithaka, a film by Julian’s brother Gabriel Shipton which follows their father John Shipton across the world as he campaigns for his son. The broadcast is a milestone in the Australian campaign to free Assange from the shackles that the US and UK have bound him since 2012, when he sought asylum in the Ecuadorean embassy in London, fearing, rightly, that he would extradited to the US.

Anthony Albanese is taking an interest in this case, in contrast to Scott Morrison’s government that showed little interest in pushing Washington on behalf of an Australian citizen facing cruel and unusual punishment in the US It was manifested in an answer he gave last week in a media conference and was  confirmed by his Foreign Minister Penny Wong in an interview on the ABC last Friday.

Asked whether he would intervene with the US to save Assange, Albanese replied that his “position is that not all foreign affairs is best done with the loudhailer.” In other words, as one foreign affairs expert told this writer, Albanese is rightly respecting the US-Australia relationship by raising the Assange issue in private with the White House.

Wong’s comments last week should also be seen as a positive sign that, at last, some action will be taken to stand up for freedom of speech by ending the Assange case. Speaking on Radio National last Friday, Wong said:

The Prime Minister has expressed that it’s hard to see what is served by keeping Mr Assange incarcerated and expressed a view that it’s time for the case to be brought to an end.

As former Labor foreign minister Bob Carr has written, it is perfectly legitimate for Australia to ask the US to withdraw its case against Assange. Carr has also pointed to the dangerous precedent set by the case – the extraterritorial reach of the US to seize anyone anywhere in the world who exposes something which embarrasses Washington. On September 8, 2020 Carr told The Sydney Morning Herald:

If America can get away with this — that is digging up an Australian in London and putting him on trial for breaching their laws — why can’t another government do the same thing? For example, an Australian campaigning for human rights in Myanmar, that Australian in theory could be sought by the government of Myanmar and brought back to Myanmar from London and put on trial there for breach of their national security laws.

Ironically the Morrison government opposed the security law that China imposed on Hong Kong in 2020 in part because it includes a provision which catches foreign citizens who criticise Beijing’s rule in Hong Kong.

The case of Assange cannot be allowed to continue. It represents an affront to fundamental democratic values and it shows Washington to be no better than authoritarian regimes that hunt down critics the world over. The early signs are the Albanese government is uncomfortable about the case, which is a welcome development, but there is little time to do so. 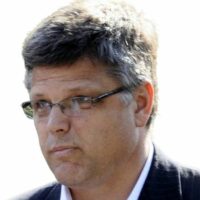