Stokesed in Japan: the ambassador and the media mogul Although best known as a media mogul, much of Kerry Stokes’ wealth is derived from LNG, coal, iron ore and beef, of which Japan is a major importer. Boosting demand is a key role of Australia’s Japanese ambassador, Richard Court. As a director of three Stokes companies, Court would be well aware of the flow-ons. So why not disclose his relationship? Jommy Tee investigates WA mining networks and political connections.

When Richard Court got the Tokyo nod in 2017 – a plum political appointment as ambassador to Japan courtesy of then foreign minister, Julie Bishop –  his ongoing corporate directorships were not publicly exposed.

With Stokes’ interests in mining, energy and beef production, it’s obvious that any efforts by our newly-appointed Japanese ambassador to boost demand would advantage the Stokes empire.

The business connections between Court and Stokes

Court’s business connection with Kerry Stokes goes back 17 years. When he resigned as WA Premier in 2001, Court picked up a number of corporate directorships and senior positions. Within two years, he had moved into the orbit of the Kerry Stokes empire.

It was also in 2008 that Court moved into the inner sanctum of Stokes’ web of companies, becoming director of Stokes’ private investment vehicles Clabon Pty Ltd, Mercury Corporate Pty Ltd and Redlake Enterprises Pty Ltd. Positions he holds to this day.

Court would later be joined on the board of these companies by David Gonski and Warwick Smith in 2009 and then by Neville Owen in 2012. The four replaced Stokes’ troika of trusted business lieutenants: Peter Gammell; Robin Waters; and Ken Parker.

The four prominent board directors are obviously close confidantes of Stokes to warrant their respective positions on the board. The extent of that trust is manifested through Clabon owning all 1.5 million shares (valued at $62 million) in another Stokes family company — Australian Capital Equity (ACE). The Stokes (Kerry, Ryan and Christine, Kerry’s wife) hold three of the five ACE directors positions and are joined belong term business associates, Brian O’Donnell and Robin Waters as the directors. The Ambassador and the ex-Foreign Minister

All of that is by way of background to unpack the politics behind the appointment of Richard Court as Australian ambassador to Japan. 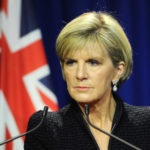 Court was appointed to the ambassadorial job in November 2016, by fellow Western Australian and then foreign affairs minister, Julie Bishop. The political appointment – which broke 43 years of the Tokyo post held by a career diplomat – formally commenced in April 2017. We can safely assume the once senior adviser to Richard Court, Senator Mathias Cormann, supported it. Bishop, when foreign affairs minister, had previously appointed Court to the Australia Japan Foundation Board in 2015, perhaps as a precursor to paving the way for Court’s rise to the ambassadorial post.

Julie Bishop and Richard Court have long been political allies.

Court gave Bishop his support and backing when she sought preselection for the seat of Curtin in 1998. Three years later, after the WA Liberals lost office in 2001, Court was involved in a covert political plot to plan his succession by drafting Bishop, then a federal Liberal backbencher, into state parliament. Bishop pulled out after an uproar from Court’s opponents and federal colleagues who declared it a lapse of judgement.

It seems fitting that Bishop, who received the support and backing of then WA premier Richard Court in 1998, should, just shy of 20 years later, back and appoint Court to the plum diplomatic post. More to it than media

When Richard Court took up his appointment in 2017, Japan was Australia’s second largest trading partner and second largest export market. Our major exports to Japan include:

While Stokes is publicly recognised first and foremost as a media mogul through his ownership of the Seven Network though  Seven West Media Limited, most of Stokes’ wealth is derived from mining, mining services and oil and gas interests. Indeed, the Seven Network only accounts for 8% of the Seven Group Holdings (SGH) assets by value.

The Seven Network is, however, a strong promoter of the views of the “quiet Australians” – Barnaby Joyce, Pauline Hanson, Prue MacSween, and Mark Latham – who appear regularly on its number one breakfast program, Sunrise. Their pro-mining views regular echo those of the network’s principal owners, the Stokes family.

This is not surprising when we analyse the other SGH results and Stokes holdings.

SGH derives most of its annual revenue from industrial services. This sector provided $4 billion in trading revenue through the sale of industrial machinery to customers in Australia’s iron ore and thermal coal regions with key customers being BHP, Twiggy Forrest’s Fortescue Metals Group, Rio Tinto and Gina Rinehart’s Roy Hill group. The jewel in the crown being Westrac, one of the largest Caterpillar equipment dealers in the world, which contributed $3 billion in revenue. Reminder: Richard Court was on the board of Westrac from 2006 to 2013.

Oil and gas interest make up another large chunk of SGH’s assets. SGH owns sizeable oil and gas interests via a 28.6% stake in Beach Energy and 100% of SGH Energy (including 15% of the Crux LNG project). The Stokes, through another investment company, Wroxby Pty Ltd, also hold a sizeable stake in another mining entity, BCI Minerals, with iron ore and potash interests.

Hence, any expansion of trade between Australia and Japan in the core resources areas of LNG, and iron ore could lead to economic flow-ons for the Stokes’ mining and oil and gas concerns. This brings us to Richard Court’s current role of Australian ambassador to Japan.

On face value, Court’s role in Western Australia’s development of iron ore mining and previous corporate interest in an iron ore producer qualified him as a suitable candidate to strengthen and further facilitate iron ore exports to Japan — our second largest trading partner.

The Japanese at least thought highly enough of Court to give him a gong in 2008 – the Order of the Rising Sun, Gold and Silver Star – for expanding Australia-Japan relations and strengthening economic ties

Court makes no mention of his current Stoke directorships on his official Department of Foreign Affairs and Trade (DFAT) page. Nor were they mentioned in Foreign Minister Bishop’s press release announcing his appointment.

DFAT’s Conducts and Ethics Manual, oblige public officials to declare real or apparent conflicts of interest annually. These include financial interests, as well as private interests such as relationships that can conflict with public duties and responsibilities.

However, unlike the register of interests for politicians, there is no public register for politically-appointed ambassadors.

Imagine the outcry if a Minister of the Crown declared that he was still a director of three companies associated with an Australian billionaire, and didn’t relinquish said directorships.

With Stokes’ interests in a range of mining, energy, LNG, and livestock fields, any efforts by our man in Tokyo to boost demand in these areas would deliver positive flow-ons to the Stokes empire. Court would be well aware of this. especially as a director of three Stokes-related companies. The question is: does his ongoing association with Stokes’ companies present a conflict of interest? Should his directorships be disclosed despite not a being a protocol requirement for politically-appointed ambassadors?

Public support is vital so this website can continue to fund investigations and publish stories which speak truth to power. Please subscribe for the free newsletter, share stories on social media and, if you can afford it, tip in $5 a month.
$5 per month
$20 per month
$100 per month