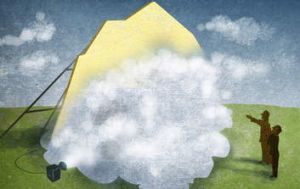 Somebody put it nicely on Twitter the other day. When the world moved to cars from the good old horse-and-buggy, there were teething problems. Roads were no good, cars got bogged.

Roads soon improved however, as did cars, and despite the efforts of some to enforce 19th century traditions – such as former PM Tony Abbott with his knights and dames caper – the world is moving on.

Australia, with its failure of energy policy, is being left behind. Stunts such as Scott Morrison waving a lump of coal about in parliament, and “policy” such as flinging a billion dollars in taxpayers’ money at an Indian billionaire trying to build the world’s largest new thermal coal mine, only entrench the rising disaffection in the community with politics – and the perception that our political leaders are in hock to the fossil fuel industry.

Accusations that South Australia’s outages and price rises were caused by renewables have thankfully been debunked in recent days by the simple fact that Queensland power prices have run even higher, and Queensland is not big on renewables like SA.

Amid the blame-fest then, amid the rancorous debate now raging about renewables and coal it is worth considering who operates Australia’s power networks. It is the Australian Energy Market Operator (AEMO).

Being an obscure acronym, AEMO has escaped public attention yet AEMO has been woeful in its energy forecasts, and AEMO is a company which 40 per cent owned by big, mostly foreign-owned power companies. Its board is stacked with industry executives, consultants and directors from Big Law and Big Four accounting, whose firms earn millions from advising the power giants.

Peak demand for profits is rising

Despite however the clear conflict of interest in AEMO having industry shareholders and directors, if you proceed to the Board and Governance section on its website and tap up “Conflict of Interest Guidelines – Director Interests Protocol”, you will find this: “Server Error. 404 -File of directory not found”.

Instead, we have ten per cent price rises and rising “energy poverty”. We have a corporatised and privatised system where every entity has its own board, executive, HR, PR, you name it, dozens of them, all wanting a feed.

Then there are the lawyers, accountants and external consultants who earn their feed by advising industry, reinforcing extravagant spending claims by the power giants – spending which goes directly to our energy bills.

All this goes further to the abject failure in Australia’s energy policy. So, to run through the AEMO directors, we have: chair Tony Marxsen who is a consultant, Jon Hubbard, formerly PwC and an energy company director, Sibylle Krieger, who is ex-Clayton Utz, Stephen Orr “extensive senior management experience in the energy industry”, Jane Tongs, ex-PwC, Frank Calabria, presently CEO of Energy Markets for Origin Energy, Peter Davis, former CEO of Aurora Energy, and John Pittard, ex-Shell and chairman of RXP Services.

Surely, these directors ought to disclose their conflicts clearly on the AEMO website. Surely, AEMO should be in the spotlight as clearly as coal, and the scapegoat for recent power outages, renewables.