The Reverse Bradbury: your electricity bill and the ACCC’s gas report Famously, Australian ice skater Stephen Bradbury won the speed skating gold medal at the Salt Lake City Winter Olympics when his four fancied rivals all fell just before the finishing line. So it was yesterday that the ACCC did a Reverse Bradbury and fell at the finishing line, letting the four gouging champions of Australia’s gas cartel through for a knife-edge victory.

It was shades of Greg Norman at the 18th hole at Augusta. This was no air swing, the regulators saw the ball and they hit it. But in the end it was a slice into the Clubhouse.

Power bills are doubling because the price of gas has shot up from $5/GJ to $55/GJ and gas determines the price of electricity.

To sum up, the ACCC handed down its much awaited Interim Gas Report yesterday. They almost said it, the C-word that is, C for Cartel, they were *that* close. They tried hard, but in the end they fluffed it, recommending we should drill for more gas to ease the supply crisis – a fake crisis created by the cartel to drive up prices – rather than hammer the Big Four gas producers for market rigging.

Australia has plenty of gas. We are the world’s biggest exporter but Exxon/BHP, Santos, Origin and Shell and their lobbyists from APPEA run the line that there is a shortage so we need to produce more gas.

New ACCC boss Gina Cass-Gottlieb did almost all the right stuff. She identified “high market concentration”, she found the cartel had been profiteering by selling Australian gas into foreign spot markets at the expense of households on the East Coast of Australia. She found they were “not engaging with the domestic market in the spirit of a Heads of Agreement”. She identified cosy “joint marketing arrangements” which is regulatory vernacular for collusion.

Alas the competition regulators stopped just short of using the word ‘cartel’ because cartels are illegal and the burden of proof is probably written evidence of collusion to rig the market, or a whistleblower in the cartel fessing up.

We’ve been saying it for years. Our contact at IEEFA, Bruce Robertson has been saying it for years. And finally the competition regulator, the ACCC, almost said it. The gas cartel has conspired to profiteer from every man, woman and child in Australia by forcing up energy prices to make a profit for their foreign shareholders. We are talking about foreign owned companies which pay very little in tax and royalties.

“The ACCC’s report raises concerns about the high level of market concentration, noting that LNG exporters and associates had influence over almost 90 per cent of the proven and probable (2P) reserves in the east coast in 2021 through direct interests, joint ventures and exclusivity arrangements.”

Not quite “price-fixing” but close.

“Increasingly, LNG exporters have diverted most of their excess gas to overseas spot markets, with as much as 70 per cent of the excess volume going overseas in recent years,” Ms Cass-Gottlieb said.

Flogging it to overseas buyers on spot markets to profiteer at the expense of Australian households. Bear in mind we own the gas and they should be paying decent royalties to extract it, let alone income tax to deserve a social licence to operate in this country.

“If LNG exporters were to provide all of their excess gas to overseas markets, the east coast gas market would be facing a supply shortfall 56 PJ.”

If they keep doing it there will be a shortage next year so power bills will keep rising.

“Not in the spirit” is regulatory euphemism for cheating.

“The ACCC has examined upstream competition and timeliness of supply and found that this market is highly concentrated and dominated by the three LNG exporters and their associates.”

Indeed “their associates” in the Australian Financial Review are sobbing today that the poor little multinationals are being demonised and we need to frack up some more farmland. Yep, pulling gas from the domestic market here to create a supply crisis and profiteer at the expense of Australian consumers.

“The LNG exporters influence supply through numerous joint ventures and exclusivity agreements. With the high degree of concentration in this part of the market, we have observed that joint ventures, joint marketing and exclusivity arrangements are contributing to the lack of effective upstream competition in the east coast,” Ms Cass-Gottlieb said.

“Particularly concerning” is regulatory euphemism for these guys are getting away with blue murder.

Nonetheless, the answer – the Reverse Bradbury that is – is to drill for more gas so the cartel has more to export before the fossil fuel economy peters out.

This chart below says it all. Supply has exploded, demand remains flat. Prices have exploded, paradoxically, with the rise in supply. That is when you *know* something is up. From 2014 when the LNG terminals were up and running and the cartel was turning gas into LNG for export, Australians have been paying export prices. Ripped off, cheated out of our own gas. 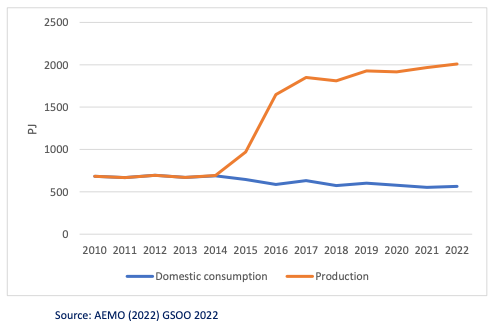